Tens of thousands of trade union members took to the streets of Prague on Saturday to protest against the government's planned reform package. The crowd gathered in Prague's Zizkov district and marched to the city's Wenceslas Square, where it declared to the public that the reforms will benefit the rich and harm the middle and lower income classes. Dita Asiedu looks at the workers' reservations and asks whether they are founded: 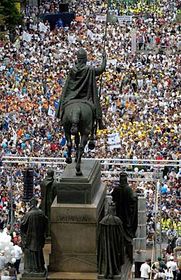 Photo: CTK Adjusting the social system to a free-market economy has been a huge task for almost all governments of Europe's post-communist countries. The Czech coalition government of the Civic Democrats, Christian Democrats and Greens, has now presented its own reform plan that aims to reduce the country's fiscal deficit and prepare it for the adoption of the Euro with ambitious changes to the tax and welfare systems. Besides introducing a flat 15-percent personal income tax and raising the lower VAT rate from 5 to 9 percent, the package also abolishes sickness benefits in the first three days of an illness, gives incentives to mothers who opt for a shorter maternity leave, and introduces new healthcare fees in the form of a 30-crown fee charged for every visit to the doctor's and a 60-crown fee per every day spent in hospital.

Whistling and holding banners over 30,000 protesters took to the streets on Saturday to call on the government to revise its reform package. Jiri Schlinger, the head of the association of health and social care trade unions, says lower income citizens will face a heavy financial burden if the government's vast social spending cuts are approved: 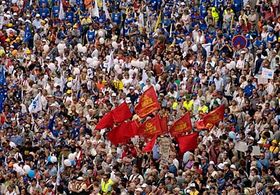 Photo: CTK "If public budgets are lowered then there will be less money available for the public administration and public services. This will naturally affect the poorest and those who need help the most, be it in the area of social services, the health sector, or in the sphere of education. There won't be enough money for schools and universities. We have already faced budget cuts in the health care sector so more cuts will burden us even further. State subsidies in health insurance will also decrease, so people will have to pay more for their health care."

So are the reservations of the trade union members founded? Economic analyst David Marek of Patria Finance says reform is necessary but needs a well planned structure to make the transition as painless as possible: 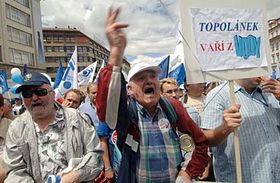 Photo: CTK "I would say that it is necessary to view the budgetary policy reform proposal critically but I wouldn't be as critical as the labour union. The core of the prepared reforms should lie in the restructuring of expenditures. So far, we can see a lot of effort to reform the tax system and this is not the real problem of our fiscal policy. So, I would shift the focus in our budgetary policy more towards the expenditures side."

Trade unionists say they have voiced their reservations and the ball is now in the politicians' court. Following the demonstration, Prime Minister Mirek Topolanek told journalists that his cabinet had no intention of reacting to Saturday's protest. According to Mr Topolanek, all the discussion that is necessary has already been held between the three groups concerned - representatives of the government, trade unions, and employers. 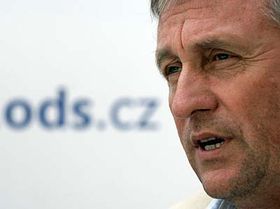 Mirek Topolanek, photo: CTKJust as his cabinet withstood the opposition's attempts at pushing through a no-confidence vote last week, it will withstand pressure from the trade unions, he concluded:

"We have been in discussion with trade unionists on the level of the Council of Economic and Social Cooperation, the so-called tripartite. Trade unions are provided with all the information and documents of these meetings regularly. As far as the demonstration is concerned, I think it will be just like the no-confidence vote last week. In the end, everyone wants our measures - the way they are - to be passed."

The proposed reform package is currently being discussed in the lower house of Parliament, where it has already passed through the first reading. Even though some resistance is expected during the second reading, the coalition government hopes to see the changes in place as of January 2008.