Thousands call on government to step down

This weekend saw thousands join an anti-government protest in Prague calling for an end to the current government and its reform policies, which critics call unnecessarily strict. The trade union-led demonstration saw as many as 100,000 people come out - with the promise that unless the government paves the way for early elections, protests will only be more intense. Photo: Barbora Kmentová In a month of low points for Petr Nečas’s crisis-racked government Saturday offered little respite, as around 100,000 people from all over the country descended on Prague’s Wenceslas Square, ready to make heard their deep discontent. The rally, estimated by union leaders as the “biggest in the country since 1989”, kicked off under the slogan “Stop vládě” – “Stop the government”, with many beating drums, shaking rattles and blowing plastic trumpets.

Many rose early in the morning to travel across the country by bus or train to reach the capital, determined to be heard. Echoed throughout were accusations that the government’s wide-reaching reforms were exceedingly harsh and that the government was saving at the expense of the weakest groups in society: the elderly, the disabled, and the poor. Václav Krása, the chairman of the National Council of People with Disabilities, was one of many to speak: 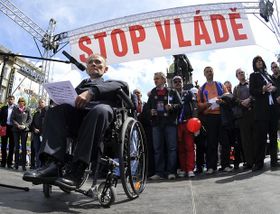 Václav Krása, photo: CTK “Finance Minister Kalousek: it’s necessary to look for funds where they already exist – not among the disabled, pensioners and families with children!”

Union representatives, meanwhile, warned that if the government does not heed its call and pave the way for early elections – and certainly there has been no indication it will do so (having apparently weathered the break-up of the outgoing party Public Affairs and retained enough mandates to remain in power) the next time the unions’ approach will be even tougher. Bohumír Dufek, the head of the independent trade unions, was a key figure at Saturday’s demonstration:

“We want new elections! If we don’t see new elections, then, a general strike. We will paralyse this country until the government falls!” 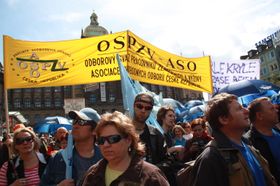 Photo: Barbora Kmentová The prime minister responded to the massive protest by saying he fully respected people’s right to voice their opinion but charged the event had been politicised. He repeated it was in the country’s best interest for the government to continue in its policies, a view shared by his finance minister, Miroslav Kalousek, who stressed that the government’s austerity measures could not be put off:

“To want us to drop austerity measures is the same as leaving a sick tooth in the mouth long enough for the entire gums to be infected.” Miroslav Kalousek, photo: CTK The question is whether the message, at this point, is still getting across: following the most recent government crisis, in which the Public Affairs party effectively imploded, polls suggested that most of the public would welcome early elections. Discontent and disappointment are riding high not only on the political Left but also among many on the Right; buffeted by repeated scandal and crisis and now looking far less stable in the Chamber of Deputies, it is questionable just how long the government will be able to trudge ahead and whether at this point it can do anything at all to change its increasingly negative image.