With the southern Gulf Coast states of the US still reeling from the devastation caused by hurricane Katrina and the subsequent floods, the Czech Republic has offered to help. On Monday morning the Czech president and prime minister both had meetings with the US Ambassador in Prague, William Cabaniss. But what kind of help can a small country like the Czech Republic actually give? 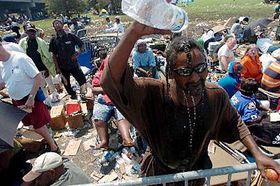 Photo: CTK At a press briefing after the meeting Prime Minister Jiri Paroubek expressed sympathy with the many victims of the disaster, adding that this was the kind of occasion when friends should react with real help rather than gestures. He said that the Czech Republic had emergency teams available that could be put into action straight away.

He suggested that they could help with the urgent work of helping to get fresh water supplies back in operation. He also proposed sending first aid teams and field hospitals - such as have already served in Afghanistan, Iraq and Sri Lanka. The Czech army also has an anti-chemical unit that Mr Paroubek said could help to decontaminate areas where chemicals might have leaked into the water supply. 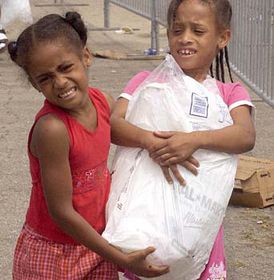 Photo: CTK The Czech Republic also has its own experiences to fall back on. It is only three years ago that huge areas of the Czech Republic suffered some of the most disastrous floods in the country's history. At the time the government and the emergency services learned a great deal from the experience, and so they have accumulated some useful know-how. The US ambassador, Mr Cabaniss, pointed to the parallels between the disasters in the two countries when he thanked the Czech prime minister:

"Thank you very much for this huge outpouring, for this offer of assistance. This has been the greatest national catastrophe in the history of the United States. You certainly have experience with a city under water. I have a little book that shows Prague under water in 2002. We have a similar situation in New Orleans, but it is different in that higher numbers of people have been completely flooded out of their homes. 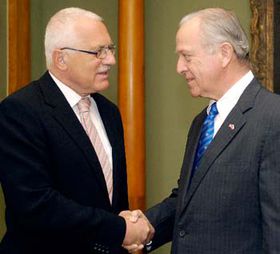 President Vaclav Klaus with the US ambassador William Cabaniss, photo: CTK "Your offer of assistance is going to be taken under immediate consideration by our 24-hour organization set up at the State Department in Washington, and they will give me back a specific request that we can bring back to you before the end of the week. Your offer covers a lot of specific expert assistance, not only with people, but with equipment. Thank you." 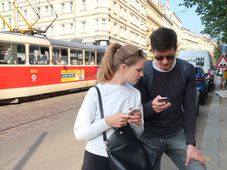 Europeans will in future receive instant alerts on their mobile phones if they are close to a terrorist attack or natural disaster.…

The month of July, 1997 brought devastating floods to Central Europe. The flooding began in the Czech Republic, then spread to Poland…