The 43rd Karlovy Vary International Film Festival closed on Saturday in traditional fashion with the handing out of Crystal Globe awards. It was a Danish film, ‘Terribly Happy’, which scooped the out-and-out top prize, though the Czechs were represented in other categories – with the Crystal Globes for best actor and best actress this year remaining firmly on Czech soil. 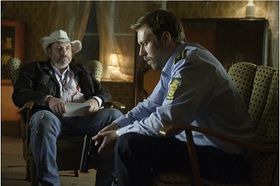 'Terribly Happy' The winning film at the 43rd Karlovy Vary International Film Festival is announced at the event’s closing ceremony on Saturday. In the Hotel Thermal’s Grand Hall, in front of an audience of hundreds, Danish director Henrik Ruben Genz is called up to receive his award. Genz’s film ‘Terribly Happy’ – the story of a policeman from Copenhagen who is forced to adapt to Danish small-town life – wooed judges with its ‘stunning cinematography’ and its actors’ strong performances. 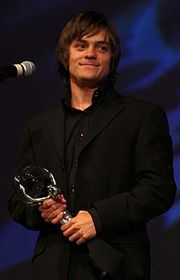 Jiří Mádl, photo: CTK But the Crystal Globes for best actor and best actress went elsewhere. It was a double whammy for the Czech film ‘Night Owls’, with actress Martha Issová landing an award for her first ever female lead. Her male counterpart, Jiří Mádl, was also decorated for his role in the film. He played Ubr, an adolescent geek with a penchant for raking in bins.

Even before he got the award for his role in ‘Night Owls’, Jiří Mádl said that this was one of the best Karlovy Vary festivals he had ever experienced:

“It’s the first time I actually have something to do here. I’m officially here as a guest, and usually I’m here just to visit some friends and see some people from the industry. I don’t usually even have any accommodation here – so this is the first time I’m here officially.”

The audience award went to the Russian director Nikita Michalkov for his film ‘12’. It was more Russian success in the ‘Best Director’ category, with Alexej Uchitel taking the Crystal Globe for his film ‘Captive’.

Award ceremonies aside, it is a different sort of cleaning up that’s taking place in Karlovy Vary this Monday, as the tents, the banners, the food stalls and the decorations all get tidied away. The film festival is over for another year, but for those who won a Crystal Globe in particular, it could be just the beginning…