Tension has mounted around the Czech military field hospital stationed in Iraqi town of Basra over the past few days. The Czech contingent have been accused by an Iraqi religious leader of defaming the Koran, and Wednesday saw a demonstration of more than a thousand people outside the field hospital demanding that the Czechs apologise. 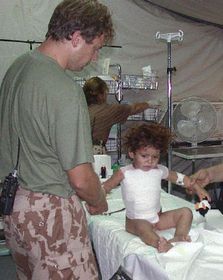 Czech field hospital in Iraq, photo: CTK The 350-member hospital unit, which mainly treats Iraqi civilians, has been stationed in Basra in southern Iraq as part of a humanitarian mission following the US-led war to topple Saddam Hussein's regime.

"From the very beginning of our mission here we have been under pressure of complications caused by the very high temperatures."

Radio Prague was told a few days ago by Mojmir Mrva, the commander of the Czech contingent in Iraq. However, it is not only the heat that is troubling Central Europeans in the sands of the Iraqi desert. Sheikh Sabah Saidi has accused members of the Czech military unit of defaming the Koran. He apparently told his followers in Basra that the Czechs had made and distributed English-language leaflets defaming the Islamic holy book.

Czech authorities reject the claims as provocation and attempts to destabilise the situation in Basra. The head of the military hospital Ladislav Sticha investigated the matter:

"When they started putting forward demands to hand over to them the culprit, or apologise on a governmental level, I was able to clearly refute their claims and prove that the Czech Republic has nothing to apologise for, because none of us have committed any offence."

Security guards at the field hospital have been on alert since the accusation, but there have been no incidents and the situation has somewhat calmed down. 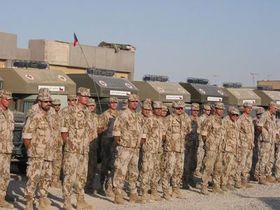 Czech field hospital Mr. Sticha said the Czech unit had nothing to do with the leaflets, adding that the radical leader has been "a thorn in the side for a long time". Otherwise, the Czechs have been maintaining good relations with locals, as commander Mrva told us:

"The presence of the Czech contingent in Southern Iraq was praised highly by representatives of the town of Basra, especially by the governor, Mr. Abdulativ."

Although the main suspect behind the conflict is considered to be the spiritual leader who even threatened mass protests and violence if the Czechs do not apologise, things may not be so clear. Czech representatives as well as many local citizens consider the leaflets as an act of subversion that true Muslims could never carry out because their faith prohibits such deeds.