Prague residents and visitors may have noticed during their wanderings small brass plaques set into the pavement in front of apartment blocks and houses. They are ‘Stolpersteine’, literally ‘stumbling stones’, originally the work of a German artist named Gunter Demnig who wanted to remind residents in his city of Cologne of the victims of the Nazis who once lived there. The project has since spread across Europe, and this morning the latest ‘Stolperstein’ was laid in Prague, outside the last home of the Czech writer and journalist Milena Jesenská. 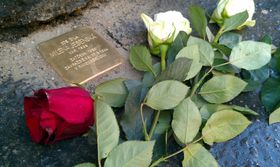 Photo: Rob Cameron A two-men crew from Prague’s cobblestone-laying company DAP drilled a hole in the pavement outside No 6. Kouřímská street, Prague 3 on Thursday. This was the last address of the anti-fascist journalist, translator and writer Milena Jesenská. The inscription on the plaque – which resembles a golden cobblestone – reads “Here lived Milena Jesenská. Born 1898. Arrested 1939. Murdered May 17th, 1944 in Ravensbrūck.”

Jesenská is perhaps best known outside this country as the object of passionate letters written by Franz Kafka that were published after the war as Letters to Milena. But she played an important role in the intellectual life of pre-war Czechoslovakia, and took an active stance against the Nazi occupiers, for which she paid with her life. Mariana Kalvach is from the Czech branch of the Stolpersteine association.

“She lived here until 1939. She moved here from Vienna. After the beginning of the Second World War, she started to act against the Nazis, and helped Jews escape from Czechoslovakia, from the Protectorate. That’s why she was arrested. She was sent to Ravensbrūck in 1940, and in 1944 she died there – she was murdered there I should say.”

She was known as the lover of Franz Kafka, but she should be remembered for much more than that right?

“Yes. She was the first one to translate his work. I’m not sure about the details of their romance, but for sure there was something between them in their correspondence, even though they met just twice. I would say that she was better known as a writer and a fighter against the Nazis.” 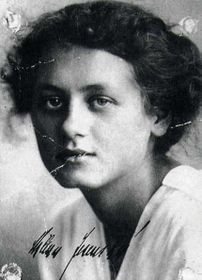 Milena Jesenská And tell me a bit more about the Stolpersteine project in the Czech Republic, because it was started by a German artist.

“Right. The idea started in 1993, and Gunter Demnig placed the first stones in Cologne in 1995. During the years it’s spread throughout Europe, and we started in the Czech Republic in 1998.”

How many are there in the Czech Republic?

And how many of those are in Prague?

And what sort of people do they commemorate?

“Most of them are Jewish victims, for obvious reasons. But we are starting to have more and more fighters against the Nazis and people who were killed because of that, not because they were Jews or various other nationalities.”

Sure. And how do you choose them? I mean there were 80,000 Jewish Holocaust victims alone in Bohemia and Moravia. How do you choose 300 of them, and where will this process end?

“Well, where it will end I have no idea. When we started the project we chose victims we knew had no relatives. But as the project became better known, people started approaching us asking us to lay stones for various people, and right now we’re not searching for victims because each year we have so many stones we are asked to lay, we don’t have the funds to lay them all.”

And it must be a difficult process choosing which ones.

“Well, we’re trying to lay all the stones that we’re asked to lay. Sometimes we have to postpone it just for financial reasons, but this has happened only a few times. So we don’t choose – who asks first…” 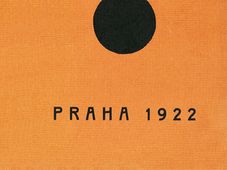 Until the advent of the First World War, intellectuals and artists sitting in Prague’s smoky coffee houses would have talked in ‘isms’: modernism,… Milena Jesenska, a Czech writer and translator, died in a Nazi death camp in May 1944. Many know her name because Franz Kafka published…

Franz Kafka has come to be one of the most influential writers of the 20th century, as well as one of Bohemia's most famous sons. This…