StB lookout, once used to spy on US Embassy, to be opened to public

Later this year, ABL FM services, a company in charge of a number of Prague’s historic sites, will re-open the bell tower on St Nicholas’ Church, where 20 years ago the Communist-era secret police, the StB, kept a hidden lookout. The cubby-hole with views of Prague’s Malá strana district was used to above all monitor activities outside nearby embassies, especially that of the US.

St Nicholas’s, located in Malostranské náměstí (Malostranské Square), is one of Prague’s most magnificent churches, but it was also a site that was once used by the notorious StB. Now, a company in charge of the church is preparing to reopen the spire which was used by Czechoslovakia’s secret police, to monitor activities outside the nearby US and West German embassies. Zuzana Fryaufová is the spokeswoman for ABL FM services in charge of the site and the new project:

“The observation point in St Nicholas’ that was used by the secret police is the only one out of around 70 that survived intact, so it occurred to us to renovate it and make it possible for members of the public to visit. Up to five adults at a time will be able to view the cubby-hole from where the StB kept watch on the US Embassy.”

The StB began to use the site back in the 1950s, right up until the fall of the regime in 1989. Original items that were used to spy on people from the top of the church will be part of the exhibit:

“The cell used by employees of the StB is still in its original condition, but we’d like to return original items, like binoculars, photographic equipment, and photographs of people they might be monitoring they had pinned up. Also, we’d like to show the original beer labels they pasted to the wall or the make-shift pissoir that was literally connected to the church’s gutter. The most difficult thing will be including new stairs to make the area properly accessible to visitors.”

Back in the Communist days, many were fully aware of the church tower being used by the StB, one reason why dissidents in the underground movement, sometimes met at its base, where they exchanged illegally published documents or books, known as samizdat. Jiří Reichl is the spokesman for the Czech Republic’s Institute for the Study of Totalitarian Regimes:

“It was known that there was an observation point there used by the StB, so sometimes dissidents met right below, where they knew they couldn’t be seen. It’s kind of a funny story, but in that way they managed to exchange illegal literature.” 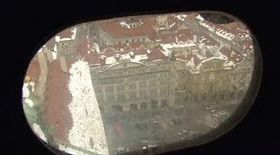 The view from the lookout, photo: www.ct24.cz The exhibition in St. Nicholas’ peak will be part of a regular tour of the church, and is expected to include original photos taken by the StB. The small lookout should be opened, organisers say, by April.