The Danish beer company Carlsberg, which distributes the popular Czech Staropramen brew in Sweden, this week recalled all Staropramen beer on tap from 680 Swedish bars and restaurants. The move came after two people tasted the beer and suffered blisters and mouth bleeding as a result. Photo: Stephanie Chapman, CC BY 2.0 Over 4,000 kegs of Staropramen beer were pulled from Swedish bars and restaurants this week after a restaurateur and a Carlsberg employee tasted the brew which reportedly did not look or smell the way it should. According to Radio Sweden both men got blisters in their mouths that later started to bleed. It was thanks to the vigilance of the restaurant owner and the swift response by Carlsberg that no clients were served the contaminated beer. According to the AP agency they themselves thankfully suffered no permanent injuries.

The thirty-liter kegs of Staropramen were imported from the company’s Prague brewery and company spokesman Pavel Barvík on Thursday confirmed that this was due to the fact that several kegs were contaminated by a corrosive cleaning substance. He said that thanks to the fast action of Carlsberg all beer on tap from this particular batch –produced on 31st of August 2015 with an expiry date on 28th March 2016 – had been taken off the market and all potentially affected retail customers had been warned. He further expressed Staropramen’s deep regret over the incident.

“The health of our consumers is of the utmost importance to us. We greatly regret this incident and are taking all possible measures to make sure it never happens again. We are convinced that this was an isolated case and that the rest of our production is safe.” 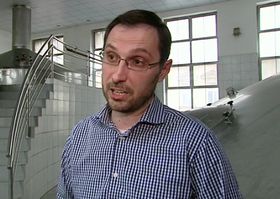 Pavel Barvík, photo: Czech Television These words appear to be confirmed by the head of information at the Carlsberg brewery company Henric Bystrom who told Swedish Television that Carlsberg is carefully examining the brewery in the Czech Republic and all Staropramen kegs delivered to Sweden and has not found any more contaminated beer.

The batch of Staropramen which was found to contain two kegs of contaminated beer has only been distributed in Sweden and no further recalls are expected. The company has also issued assurances that the Staropramen brew on sale in Czech Republic and Slovakia is perfectly safe.