Today it is easy to forget that Prague’s Letná Park overlooking the city once served as a pedestal to the largest statue in the world of Soviet dictator Joseph Stalin. Derisively referred to as ‘fronta na maso’ (queue for meat), the massive granite work featured the marshal followed by a line of anonymous ‘heroes of the proletariat’. Prague was freed of the sculptural monstrosity in 1962; now, thanks to a film crew shooting the story of sculptor Otakar Švec, Stalin will temporarily return. 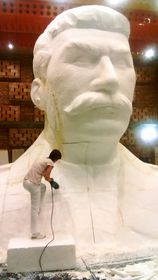 Photo: CTK The world’s largest statue of Joseph Stalin - what looked like a bread or meat line - was not a pretty a sight to behold but the shadow of the statue was short-lived in the capital. Unveiled in the 1950s after more than five years work, it would be destroyed in 1962, after the dismantling of Stalin’s cult of personality began in the Soviet Union and its satellites.

Filmmakers are now shooting a film called Monstrum about the statue and sculptor Otakar Švec, who took his life a day before the monument was unveiled on May 1, 1955. According to Czech TV, the ill-fated sculptor took his life after losing his wife and after coming under criticism over the work. Director Viktor Polesný told Czech TV the sculptor had never really wanted the commission. 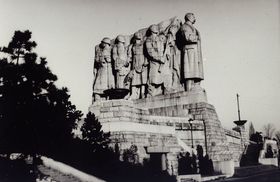 Photo: Miroslav Vopata, CC BY-SA 3.0 “He won the commission and he didn’t even want to win it. Once he did, there was no way back. The legend is that the design was scribbled on a menu in the pub and then folded over … That was how the basic idea came together.”

A giant polystyrene version painted granite gray in Czech TV studios and depicting part of the statue, namely Stalin’s head and shoulders, and two others in the line behind him, will now go up on scaffolding overlooking the city. For roughly a week, skateboarders who normally do fakies and grinds on what remains of the Stalin pedestal, will be left to skate elsewhere. The architect on the film is Petr Fořt: Photo: CTK “Somewhere around this level, we will be able to see Stalin’s head and the shot will show the young sculptor Pavel Soukup looking out over the city. Of course, we are about only half as high up as the real statue was, but given the views of the city from here, nobody will to see any comparable difference.”

The largest group sculpture in Europe during its existence, the monument had a reinforced-concrete structure and the work contained 235 granite blocks. The Stalin Monument weighed 17,000 tonnes. The gigantic work was blown to smithereens using a reported 800 kilograms of explosives. 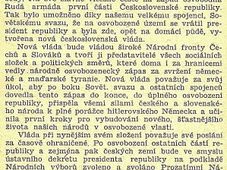 On April 5, 1945 the newly formed Czechoslovak government agreed on a manifesto known as the Košice Programme. It clearly delineated… 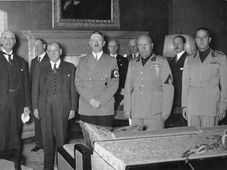 Munich Agreement – The behaviour of the great powers explained

This Sunday will mark the 80th anniversary of the infamous Munich agreement - the deal between Hitler, Mussolini and the two western…