In certainly one of the most dramatic criminal escapades in the Czech Republic in some time, a teenage boy from south Moravia achieved national notoriety this week when he held up a petrol station, took two people hostage and went on the run. David Koblasa, photo: CTK David Koblasa, an 18-year-old waiter from the south Moravian town of Breclav, is now in police custody and suffering from a gunshot wound in the stomach. Unknown a week ago, his boyish features are now splashed across every national newspaper.

In the early hours of Wednesday morning, Koblasa - said to be addicted to gambling machines - held up and robbed a petrol station in Breclav, making away with just under 20,000 crowns, or around 650 US dollars. Local police officers called to the scene saw him leave the petrol station but before they could catch him he made his escape, on foot. A man who just happened to be leaving a nearby building found himself embroiled in the drama, when Koblasa took him hostage.

Here's where the story takes a more bizarre turn. Koblasa - who taxi drivers at Breclav railway station had refused to take - freed the first hostage, taking a police dog handler hostage instead and making off in his police car. Speaking on the car radio he revealed his identity to the police, saying he didn't care if they shot him dead. At the same time he must have had some interest in saving his hide, as he ordered the police to stop tailing him. Two hours after the petrol station hold-up, David Koblasa freed the policeman and abandoned the officer's car. 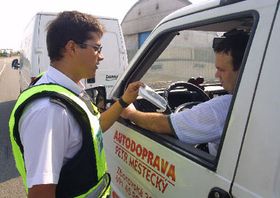 Searching for David Koblasa, Photo: CTK There then followed a period of around 36 hours in which the teenager somehow avoided detection, despite the fact that a nationwide hunt for him was underway. A former accomplice of his came forward, telling the police Koblasa was still in the Breclav area. He was located on Thursday afternoon - after a tip-off from a local - in a field of sunflowers near the town. When he threatened the police with what turned out to be an air pistol, one of them shot him in the stomach, causing only light injuries. It was the end of the road for David Koblasa. He turns 19 in October, but will probably be in his thirties by the time he gets out of jail.