The Social Democratic Party, which suffered a humiliating defeat in the regional and Senate elections, is analysing the reasons behind its poor showing and considering ways to boost its chances ahead of next year’s general elections. Prime Minister Bohuslav Sobotka has now come under increasing pressure for the party to mend relations with President Miloš Zeman. 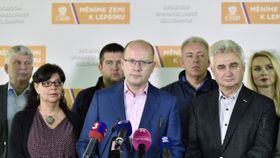 Bohuslav Sobotka (center), photo: CTK If the regional and Senate elections can be regarded as a litmus test of the 2017 general elections then the ruling Social Democrats have plenty to worry about. Despite the growing economy and generous welfare handouts, the party performed poorly in both the regional and Senate elections. Formerly the dominant regional party, the Social Democrats only won in two of the thirteen regions where elections took place and, with 12 candidates in the running, secured just two seats in the Senate elections. Analyses both from inside and outside the party suggest that the party has been losing ground because it lacks dynamics and is unable to attract young, urban voters. Commentator Jiří Pehe says it needs new blood. 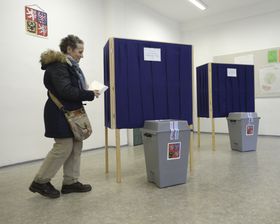 Photo: CTK “Over the years the Social Democratic Party has become a party of small towns and the countryside, it now addresses mainly older people. In the larger cities it has been pushed out by its rival ANO. In order to change this it will need to find a way to address urban voters, younger voters. As long as the party continues behaving like a trade union organization that defends various aspects of the welfare state and does not come up with new teams that would address the young generation it will continue to decline.”

Although heads would normally roll in the wake of such an election defeat party leader Bohuslav Sobotka is not considering resigning and, apart from an isolated call from the president, no one has suggested he should quit. For one reason, because there appears to be no obvious replacement and for another, because party members clearly fear a change of guard just a year ahead of the general elections. Instead, some influential party members, among them the newly-elected Pardubice governor Martin Netolický, are urging the prime minister to make peace with his arch-rival President Miloš Zeman in the hope that the president’s popularity would help boost the party’s chances in the 2017 general elections. The idea was first floated by party deputy chair, Interior Minister Milan Chovanec, a week ago following the party’s defeat in regional elections and calls for a reconciliation strengthened following its poor showing in the Senate elections. 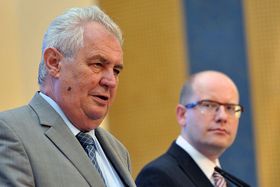 Miloš Zeman, Bohuslav Sobotka, photo: Filip Jandourek For the time being Prime Minister Sobotka is holding out against the idea, arguing that President Milos Zeman, who founded the Social Democratic Party, no longer represents left-wing politics and a reconciliation with him would be moving back rather than forward. He has, moreover, pointed to the fact that two Social Democrat candidates close to Zeman – Michal Hašek and Zdeněk Skromach – both suffered a defeat in the regional elections. However, general elections are just a year away and some party members fear there is not enough time for radical change. They are looking for a quick-fix and riding to success on the president’s coat tails seems to many to be the easiest and most reliable option. What Zeman’s critics inside the party point to is that in recent years Miloš Zeman has done more to divide the party that unite it and a reconciliation with him could present the proverbial kiss of death.