Campaigning in the European elections has taken a dramatic turn, unseen since the fall of communism in 1989. Social Democrat rallies held around the country have been repeatedly disrupted by people pelting the party leadership with eggs. The egg war culminated at a rally in Prague attended by hundreds of protesters. 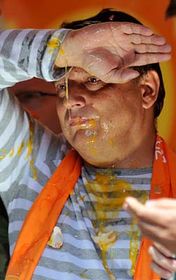 Jiří Paroubek, photo: CTK When the Social Democrats, one of the two strongest parties in Parliament, took their European Parliament election campaign to Prague for the first time on Wednesday, they knew it would not be an easy ride. Two weeks after party leader Jiří Paroubek was pelted with eggs at a campaign rally in a town outside Prague, some 47,000 people joined a Facebook group entitled “Eggs for Paroubek in Every Town.” Mr Paroubek originally planned to appear at four such events around the capital on Wednesday but in the end only attended the last rally held in the busy commercial centre Anděl. But what took place after he got on stage exceeded his worst fears.

Hundreds of eggs were sent flying at those on stage, and the pelting did not stop even after party chair Jiří Paroubek and other Social Democrat leaders left, some 20 minutes after the first hit. Covered in yolk and egg shells, they walked around and argued with some of the egg throwers. Jiří Havel is the leader of the Social Democrat ballot for the European Parliament.

“I like to talk to people; I feel it’s my obligation and part of my job.”

Did you get hit by any eggs while you were on stage?

“Yes, can’t you see? It’s on my face. It was surprising, it was the first time I had eggs thrown at me. But what can I do, that’s life.”

The governor of central Bohemia David Rath is considered the future successor of Mr Paroubek at the party’s helm, and for many he is just as unpopular as the current party leader himself. He too was a frequent target, and when I caught up with him as he was leaving the site, I took a few hits in his place. 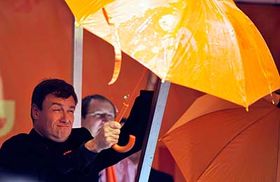 David Rath, photo: CTK “Oh, that was an egg. I think that it’s something like the Nazi period. It’s terrible that the Civic Democrats do these things.”

The party leadership has accused the rival Civic Democrats of being behind the egg attacks. I asked one of the protestors, holding a sign depicting Mr Paroubek as a genie, why she had come to protest against the Social Democrats.

“He insults us, he thinks we are stupid. But we are students, we think for ourselves, and now we can vote, too. That’s why I’m here – I don’t want to be insulted.”

Mr Paroubek says that these protests are inspired by the Civic Demorats. Did the party ask you to come here?

“No, absolutely not. I vote for the Civic Democrats but that’s not the reason why I’m here. I’ve come because Mr Paroubek brought down the government during the EU presidency.” 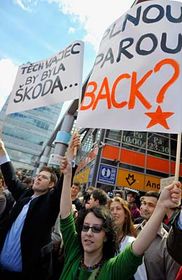 Photo: CTK The Social Democrats were never popular with young Czechs. Their policies of social securities and bigger role of the state mostly appeal to the older generation. Moreover in 2005, when Jiří Paroubek was the prime minister, the police brutally suppressed a large techno party, which for many came to symbolize the arrogance of power. Another protester had a sign that said ‘don’t throw eggs at mentally retarded people.’

“I think it’s immoral to throw eggs at mentally retarded people. These people should get proper mental treatment instead.”

The sign on your back says that you were not brought here by the Civic Democrats. Is that so?

“Yes. The alleged story is that this is all organized by the Civic Democrats. That’s a lie. I’ve met three people that I happen to know here, and none of them is a member of the party. All of them are here of their own accord.”

The police arrested 16 people at the rally. Never before has a political campaign in the Czech Republic got so out of hand. While political analysts are arguing how the egg throwing incidents are affecting the rates of the two big parties, the Civic Democrats have condemned the attacks. President Václav Klaus even said that throwing eggs at Social Democrat leaders was an attack on democracy. Meanwhile, the Facebook community has asked its members to stop throwing eggs at Mr Paroubek, and express their opinion at the polls. The Social Democrats will find out at their upcoming rallies in other big cities whether the appeal has been heard.