Smoke in the face of Czech anti-tobacco campaigners

The Czech Republic has taken a step against the anti-smoking flow in the rest of Europe. While anti-smoking bans have spread across the continent in recent years, Czech MPs have proposed a relaxation of the current rules for smoking in pubs and restaurants. Anti-smoking groups say they have caved in to pressure from the powerful tobacco lobby. 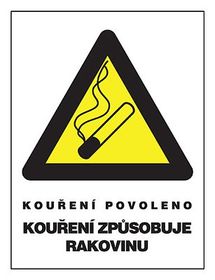 Smoking allowed, Smoking causes cancer, photo: CTK Czech MPs on Wednesday backed a proposal that owners of food serving pubs and restaurants can decide from the middle of next year whether their establishments are smoking or not. All they need to do is put a notice on the door saying where they stand. The proposal represents a weakening of the current law which bans smoking in restaurants unless it is clearly stated that space has been set aside for smokers.

MPs had another proposal before them which would have forced restaurants to separate smoking and non-smoking facilities. But some restaurant owners said they would be ruined if they were forced to separate their facilities.

Kateřina Langrová is director of the Czech Coalition Against Tobacco. She says the new proposal totally fails to take account of the risks of passive smoking.

“Unfortunately, it does not reflect the fact that second hand smoking is not only something annoying and bad smelling but that it is a factor that really endangers the health of people who are involuntarily exposed to tobacco smoke and it can also actually cause death.”

She says Czech MPs have folded before pressure from the tobacco lobby which wants to hold off anti-smoking measures as long as possible. She adds that the Czech Republic already stands out as the sole EU country that has not ratified a set of World Health Organisation measures that would clamp down on tobacco advertising and passive smoking because of opposition from tobacco companies. 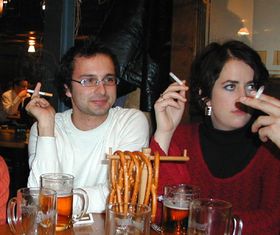 “Representatives of our parliament admit that publicly – that the pressure of the tobacco lobby is extremely high in the Czech Republic and they are successful in their efforts against control measures.”

Smoker and owner of a Prague pub- come- restaurant - Zdeněk Hach - made the conversion to a non smoking establishment almost by chance last year when he was banned from using his heated outdoor facility for smokers. But the experience proved a success and he decided to stick with it:

“Surprisingly, from October to June I can say that our experience is that income from the kitchen and food has gone up between 5.0 and 8.0 percent, sales of beer are about the same and the only negative aspect has been that orders for coffee which used to be around 160 have now gone down to 50.”

But Hach says a no smoking ban would be ridiculous in villages where there is only one pub. He maintains that the law should not be intervening in this area at all and that individual restaurant owners should be given the right to choose.