Singing in the Old Town Square 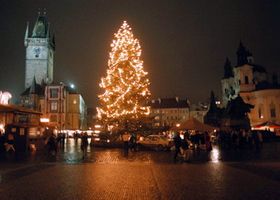 Old Town Square The Old Town Square serves as a venue for many of Prague's Christmas events, and last week it played host to the International Festival of Advent and Christmas Music. Choirs form Europe and South Africa came together to sing new and old Advent songs. The festival's organiser, Dr. Jaroslava Modrochova, told me a little more about the event and who was taking part.

"Two choirs came from South Africa, others came from France, Belgium, Sweden, Norway, Poland and Latvia. It is music from Christmas and Advent. From 18th, 19th, 20th century- so contemporary music, very different."

The festival also doubles as an international competition, which last year was won by a Czech choir.

"It was a children's choir, Ondrasek, from North Moravia. An excellent Czech choir with a very good conductor."