The Czech defence sector is in dire need of reform. The Defence Ministry's plan to transform the Army into a fully professional one has been dealt a heavy blow by the government, which has drastically cut defence spending as part of an attempt at reducing the state budget deficit and reforming public finances. As a result, Defence Minister Miroslav Kostelka has come up with a new reform plan, which calls for soldiers to be laid off and army bases to be closed down. Steps that shadow Defence Minister Petr Necas says do not go far enough, given that more defence budget cuts can be expected. Dita Asiedu reports: 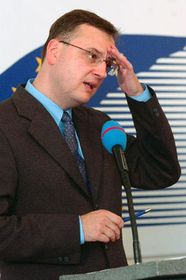 Petr Necas, photo: CTK Two percent - down from 2.2 percent - of the gross domestic product, which amounts to some 50 billion Czech crowns, is what Defence Minister Kostelka has been promised. But, on Tuesday, Civic Democrat shadow Defence Minister Petr Necas warned that the government was not to be trusted and introduced his own reform plan that is calculated from a budget of only 1.85 percent of the GDP.

"Unfortunately our armed forces are in a very bad situation, especially due to the state budget pressure. It will be necessary to make some cuts in personnel and infrastructure, so there will be a lot of work within the armed forces and unfortunately, we must totally change the concept of our reform."

And a change in concept, according to Mr Necas means doing away with certain units - such as the tank brigade - that Defence Minister Kostelka decided to keep, and minimising the size of others - air defence, for example. The key word will be specialisation as both civilians and soldiers will have to be laid off, ideally to keep only some 24,000 soldiers and 4,000 civilians working in highly specialised fields.

"I think that it will be necessary to put more emphasis on a greater specialisation of the Czech armed forces. I don't think that it would be possible to continue with our defence policy, to have a full scale Army. It will be necessary to have only small units with a high level of specialisation, flexibility, training, and technological development. This is the only way how to achieve armed forces with a high level of quality. With these armed forces I can imagine that we could enjoy some kind of respect within NATO."

With the drastic cuts in defence spending, Mr Necas points out that the Czech Republic's contribution to NATO in the future will not exceed the size of brigades. The sending of divisions, as was the case only a few weeks ago, will be too costly. In order for the country's position in NATO to not be degraded, its main focus should be on its light infantry that can be active in the NATO rapid response forces. Furthermore, a specialisation of light air and mechanised units will also be necessary.

No matter whose reform plan will be adopted, one thing is clear: the Defence Ministry has its work cut out for itself. Unlike a month ago when Defence Minister Jaroslav Tvrdik resigned, seeing no efficient way out with the budget cuts, two reform plans are at least now on the table.