Rudolf Smid captured the imagination of the Czech photography world in 2005 when his photographic collections entitled "The Scarecrows" and "Close to life, closer to death", which focussed on the personalities of scarecrows around the Czech Republic, were exhibited in Prague's Louvre Gallery. Now, for the first time in 2006, Smid returns to the capital with a new collection, but his subject matter is no less peculiar. Chris Jarrett explains why.

The tractor: For many this is merely a mundane and functional farming tool. Yet for photographer and sociologist Rudolf Smid, it forms the basis of a whole new approach to his art of rural photography. Most famous for his collection of images of scarecrows, which was displayed last year in the Louvre Gallery in Prague, Smid's latest compilation, entitled 'Art Land', includes photographs of haystacks, sheaves of corn and even "home-made" tractors. Yet Smid sees more in these than mere functionality. He explains why his interest has expanded to include these particularly curious rural features:

"I have essentially been studying scarecrows for 12 years now but the countryside is a much older interest of mine. It has fascinated me from the beginning of the eighties, when, already at that time, as a professional sociologist and a photographer, I was interested in various objects around the village, which I systematically photographed. The phenomenon of the tractor always fascinated me, somehow as a testament to so-called 'golden Czechoslovak handiwork', when people were able to assemble one complete tractor out of the spare parts from, let's say, three or four broken ones. It demonstrates some of the skill of Czechoslovak farmers, as the tractors actually run and as far as I'm aware are still used today. They're gradually wearing away, just as that period in time has also faded, and is no longer."

After his fascination began back in 1994 when he photographed his first scarecrow, Rudolf Smid has scoured the country to find examples of what he sees as a highly mystical and largely overlooked field of art. The 'Art Land' exhibition, which was opened on Thursday, and is currently on display in the National Agricultural Museum in Prague, consists of images devoted to life in the Czech countryside. One photograph for example, titled The Reserves, depicts a rudimentary, tattered scarecrow standing in a desolate field, while others depict all manner of unusual home-produced machinery. Smid believes the symbolism of this new collection is very different from that of his previous exhibitions:

"In the case of the scarecrows there was a large amount of my own inner self, since I try to bring them to life through human existence, to find certain archetypal features. But the story of Land Art contains less of this inner self. It's rather more about capturing the time period, at least visually, but my primary aim is simply to capture the tractor such that it is interesting for others. I take these photographs as if their subjects were the most attractive cars in the world, Porches or Mercedes for example, to show the contrast between such products and these humble attempts at small tractors, which don't even have any kind of body."

However rudimentary Smid's subjects may be, the exhibition provides an entirely unique look into the Czech rural lifestyle, bringing into focus certain countryside features that might otherwise be taken for granted.

'Art Land' is on display at the National Agricultural Museum until the 26th of March. 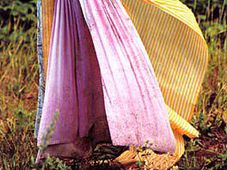 The beauty of a scarecrow

Rudolf Smid is a photographer, but you won't see him round any fashion models. He specializes in scarecrows and he's willing to walk…