A growing number of rich Czechs appear to be building private underground shelters for protection in an ever more uncertain world. The rush to build shelters, which could be used in an atomic war or other types of emergency, already started last year in the midst of the immigration crisis and shows no sign of waning with the ongoing tension between Russia and Ukraine and success of populist politicians. 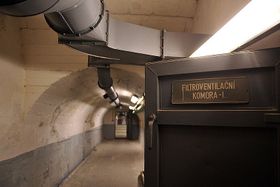 Illustrative photo: Filip Jandourek One company specialising in shelter construction in the Czech Republic, Tebrix Safety Homes, says that it has already built 28 such private bunkers after switching from the building of conventional homes. Now its order book is full to the end of 2018. Michal Terendy is the owner of the construction company.

“I think the boom started in 2015 and over the past eighteen months we have only been building underground bunkers. Our clients originally demanded just underground safes but with the current situation in the world, the immigrant crisis and the situation in Russia and Ukraine, more and more clients wanted to turn them into shelters. Nowadays, we provide shelters where you can spend up to twelve months there.”

The walls of the bunker are made of 30-centimeter-thick ferroconcrete and it is embedded three meters under the ground. It has its own water reservoir, and equipment for monitoring conditions outside, such as the weather, radiation or presence of chemicals. People can communicate with the outside world through a radio transmitter.

The price tag for such reinforced safety starts at around 2.5 million crowns with the average bunker coming in at around 3 million crowns, the price for a small flat in the centre of Prague. And the conditions on the right side of the concrete and underground do everything to try and emulate a normal environment. Michal Terendy again:

“You have to understand that the bunker is more like a luxury apartment situated underground. There is a corridor leading to the shelter that can be only entered through a steel-plated security door. The space is divided into technical room, storage space and living area. It is completely custom-made, so once it is ready, you can just take the keys and move inside. We provide everything, including food and water.”

With such demand, Tebrix is looking to expand the company to keep up with the deep pocketed clients.

Prague and much of the Czech Republic has a history of civil defence shelter for the wider public, often built at the height of the Cold War and continued for the following decades.

The city of Prague currently has about 800 shelters that could accommodate over 550 000 people in case of emergency. People could also use the metro tunnels or shelters built underneath some apartment houses, especially those built in the 1950s. But some people clearly prefer now to take safety into their own hands.