A replica of the Czech made Tatra aero sledge, which was produced for the Germans during the Second World War, has recently been made for a collector in the United States. The little car with skis instead of wheels and a large propeller at the back was intended to serve the German Army in Russia. On Tuesday the replica was successfully tested on the snow of Jeseníky Mountains.

The new replica of the Tatra V 855 aero sledge is based on the only existing model, which is owned by the Tatra Technical Museum in the north Moravian town of Kopřivnice. Lumír Kaválek, the head of the museum, says the circumstances of the unique snow vehicle’s origin are not completely clear, as most of the Wehrmacht’s documents were destroyed after the end of the war.

“Around 1941 the German Army wanted to provide their units, especially the reconnaissance units of the Wehrmacht, with suitable technical equipment within their project Drang nach Osten, or Expansion to the East. Berlin wanted to create something that would enable reconnaissance teams to cover the vast snow plains of Siberia. It resulted in an order for the Ringhofer Tatra plant, where the first plans for the aero sledge were made and where the first sledge was created in 1942.” 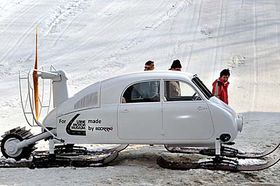 The new replica of the Tatra V 855 aero sledge, photo: CTK However, mass production of the vehicle, referred to in some reports as Hitler’s Sledge, was prevented by the Germans’ defeat at Stalingrad in 1943. In the end, only two models came out of the factory and only one of them has been preserved till today. It is now one of the most valuable items at the Tatra Technical Museum. Petr Marek, former curator of the museum, offers some more technical details: The new replica of the Tatra V 855 aero sledge, photo: CTK “There are two pairs of skis at the front and at the rear. These skis were for steering only. To start the vehicle the air-cooled rear engine from Tatra 87 was used. When the vehicle started to move, a propeller at the back was used to keep it in motion. Also interesting are the two steering wheels; the bigger one for steering the two pair of skis and the other to lift the roller up at the back. There is also a hand break on the rear skis. When they tested the vehicle here in Kopřivnice they reached the speed of 80 kilometres per hour.”

The new replica, which took two years to make, was commissioned by the Lane Motor Museum in the US city of Nashville. It boasts the largest collection of historical cars made in the former Czechoslovakia outside Europe.