This weekend, Prague’s Kampa Island turned into a melting pot of cultures from all over the world, hosting a festival called RefuFest. Now in its fifth year, the festival supports the integration of foreigners, mainly refugees, into Czech society. It offered visitors a rich programme, including music, theatre, film screenings, debates and workshops. 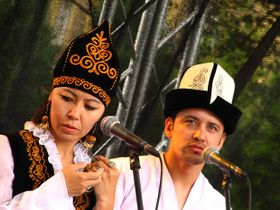 Jagalmay - Gulsara Toktosun with Tashed Farhod, photo: Kristýna Maková RefuFest is organised by Berkat, a non-governmental organization providing social services for immigrants, in cooperation with other non-profit groups. Apart from the cultural programme, there were stands presenting countries of the Third World, including their culture, political situation but also their national cuisine.

One of the bands performing at RefuFest this year was Jagalmay, who, in their own words, play music to soften homesick hearts and brighten the ever-grey Bohemian sky. One of its members Gulsara Toktosun outlines the history of the band: 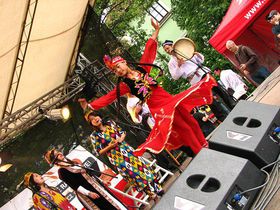 Jagalmay, photo: Kristýna Maková “We have been around for six years. Originally it was a Kyrgyz group but now we play music from all over Central Asia. We perform music from Uzbekistan, Tajikistan, Turkmenistan, Azerbaijan, we also sing Kazakh and Uyghur songs. We have a dancer called Sayara who dances Uyghur dances. This is our last performance this month; next month we are going to perform at a festival in Bratislava.”

The aim of RefuFest is to show refugees in a new light. It offers Czechs the chance to meet emigrants personally both as visitors and performers and get acquainted with their cultural background and the problems they face in 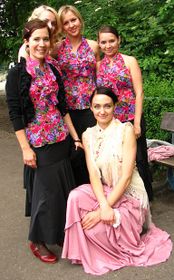 La Magia del Flamenco, photo: Kristýna Maková the Czech Republic. At the same time, refugees get information about what they can (and can’t) do while waiting for asylum.

Among the groups that also appeared on stage at the weekend was La Magia del Flamenco and its Belarusian dancer Lolita Karpenko:

“La Magia del Flamenco is a dance and music group. Unfortunately, the singer and the musicians weren’t free today, so it was only about dance. I am the art manager of the group. I mainly dance but I also do musical arrangements of various flamenco songs. I didn’t know about the festival before, even though I live just round the corner from here. It’s a pity, because I am originally from Belarus, and there is a Belarusian stand with Lolita Karpenko, photo: Kristýna Maková Belarusian food, alcohol and everything. I really miss my country here in the Czech Republic, so it’s a pleasant surprise and I am really happy to be here.”

The organizer of RefuFest, Berkat, was originally founded to help orphans in the Chechen capital Grozny. Today, among other things, it also runs a community centre for refugees, migrants and other foreign citizens in Prague. For more information, go to www.berkat.cz.