This Tuesday sees the opening of a new exhibition at Prague’s Jaroslav Fragner gallery featuring the work of renowned Czech architect Martin Rajniš. He is one of the co-authors of the famous Máj building, now Tesco, on Prague’s Narodní Street as well as the architect who designed a famous wood and glass post office, on the Czech Republic’s Sněžka Mountain. Increasingly, the architect has focused on the incorporation of natural materials. The aim of exhibition, in many ways, is to show visitors they don’t have to accept the status quo.

The new exhibition at the Jaroslav Fragner Gallery is not just a show, in many ways it marks a journey, through one of the most interesting of architectural careers, from concrete projects like Martin Rajniš’ work on the pavilion at the Expo in Vancouver back in 1986, to more recent buildings, to his travels around the world. Photographs, video, sketches and plans, are all presented, as well as a simple structure in the gallery’s garden across from Bethlehem Chapel. Together, the details show how the architect and members of his E-MRAK Studio have focussed more and more on motifs as well as materials from nature to create better and cleaner designs. Increasingly, the architect has stated publicly, the Czech Republic is suffering from poorly-designed homes, massed produced in the thousands each year. His show, he made clear on Tuesday, was a way of focussing on different approaches.

“We were really touched by things like the desert, like jungles, like the sea in different countries. Another source of inspiration were buildings made by people in the Third World. Made often with very little money or no budget at all, made from simple materials like wood or stone or something. But the results were fantastic. We were there and we saw the villages, still in a natural form of architecture. It was something that made us stop and question why the Czech Republic, as a relatively rich country, unable to produce better private housing. Out of every 100, 99 are bad.”

Mr Rajniš and his team have now collaborated on numerous structures, from private homes, to conceptual structures such as wooden towers and simple barns as well as more complex buildings, such as a wooden “Aprés Ski” dome and even a factory. All incorporate natural shapes and patterns pleasing to the eye and with an admitted Zen-like feel. Buildings he, as well as many observers, feel “lead a dialogue” with the surrounding landscape. Martin Rajniš once again:

“We started working more with wood and at first I thought it would only last a few months. Now it has been several years! But that doesn’t mean that wood is our only material. Picasso had his Blue Period but that was only a part. Now, we are in a ‘Wood Period’! The basic thing is not the material, it’s the philosophy behind the architecture.”

The exhibition is highly recommended and continues at the Jaroslav Fragner Gallery until early July. 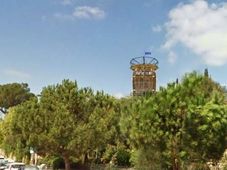 Czech designed ‘cactus’ watchtower to be constructed in Jerusalem

The city of Jerusalem is to get a new watchtower by the famous Czech architect Martin Rajniš, who has built several such towers around… 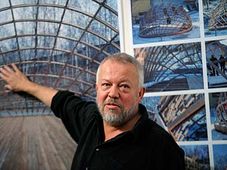 Martin Rajniš is a renowned Czech architect, who along with Johnny Eisler and Miroslav Masák, authored the famous Máj building (now…