Public tenders and corruption: can a stricter law help?

The Czech Republic has been repeatedly criticised for a relatively high level of corruption. One of the problematic areas is government contracts and public tenders. The Office for Protection of Economic Competition is trying to set things right again but says loopholes in the law should be patched up first.

What is supposed to be a fair competition among businesses bidding for government contracts has become tainted with corruption in the Czech Republic. Many public tenders simply do not take place, and offers are accepted without the required selection process. How exactly should it work? The government and all the other state bodies are obliged to call an open competition of businesses, known as a public tender, if they desire to purchase any goods or services, from computer maintenance to the construction of a new road, whenever the price exceeds 2,000,000 Czech crowns (or over 65 thousand USD).

Mr. Bednar commented on the current state of public tenders in the Czech Republic:

"Although our office has been applying the law on public tenders for more than eight years, and along with that we carry out a large amount of supervisions, I have to note that in some cases we have seen serious violations of the law. To give a few examples: sometimes the order is issued directly to one subject, and the law is not respected at all. For example, they add an amendment to a concluded contract with the selected applicant, although it is a new order and a new selection procedure should be carried out. I am convinced that the new law which we are preparing in cooperation with the ministry for local development will greatly help deal with these legal problems concerning public tenders."

The new proposed law that Mr. Bednar mentions, would allow the government to give preference to Czech firms over foreign companies but only until the Czech Republic becomes a member of the European Union next year. It also enforces a stricter code about the instances where public tenders do not have to take place, for example in cases of secret or military projects.

"As regards the new proposed law for public tenders, I would like to focus on the sanctions that are too low. I would like to say that the deciding factor is to correct illegal actions and to secure compensation for the applicant who should have been selected but was not because of a violation of the law. The sanctions have to do with repeated violation of the law and in this respect I think that the fine should be higher than it is at the moment."

Currently, the highest fine able to be handed out equals one percent of the total value of the contract. According to Mr. Bednar, plans to increase the fine to as much as 30 percent are under discussion. 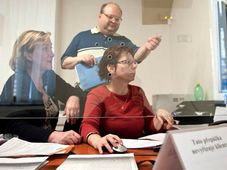