Trade unions say up to 200,000 civil servants joined a one-hour token strike on Wednesday morning in protest against cuts to their thirteenth month's salary, which is a form of end-of- year bonus. The government has decided to pay public sector employees only ten percent of the thirteenth month's salary in the future, saying they simply cannot afford to offer workers more. Many civil servants say they will actually earn less this year. 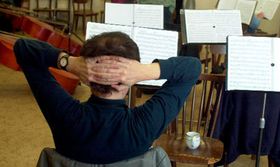 Members of the orchestra of F.X. Salda theatre in strike, photo: CTK Many schools, hospitals, social security offices and research institutes went on strike for one hour at 8 o'clock on Wednesday morning. Institutions that don't open until later, such as galleries, museums or zoos, simply opened their doors an hour later than usual. Alena Vondrova is a spokesperson for the protesting unions. She says if the government does not review its wage policy towards civil servants, they are prepared for more protests.

"I'm afraid, civil servants in this country will have to learn to fight for their rights consistently and in various radical forms, the way their colleagues in European Union countries do. Certain goals just cannot be achieved in one step."

Some public sector professions are forbidden by law to go on strike: among them fire fighters, police officers, prison guards, customs officers and mining inspectors. They have expressed support for their cause by other means. Mojmir Popp from the Brno police headquarters. 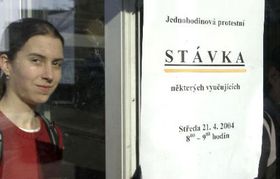 One hour strike of the teachers, photo: CTK "The Union of Czech Police Force workers distributed a petition around our units which every police officer can sign on a voluntary basis to express support."

Less than a third of the country's 750,000 civil servants joined Wednesday's one-hour strike. But the spokesperson for the protesting unions Alena Vondrova still calls it a success. Especially with the European Federation of Public Service Unions having declared its support for the protesters just ten days before the Czech Republic joins the European Union, Ms Vondrova says the government had better think again.