Britain's Prince Edward was in Prague on Tuesday, on the second day of a two-day visit to the Czech Republic. At the capital's British Embassy the prince met a varied group of young Czech achievers, presenting them with special awards on behalf of his father, Prince Philip, the Duke of Edinburgh. Prince Edward, photo: CTK "The main purpose of the visit was to promote the Edie awards, which is the international Duke of Edinburgh award scheme, known as Edie in the Czech Republic. Prince's visit aims to encourage the young people here, who have been undertaking the program and to raise funds to ensure the program can continue in the future."

In Prague in the sunny garden of the British Embassy the winners of this year Duke of Edinburgh, or Edie, awards had the chance to receive the awards from Prince Edward himself.

Klara Obadalova from the town of Podebrady achieved the highest level - the golden diploma - and was chosen to participate in an international meeting of Edie winners in Hong Kong.

"It took me three years; I had to cover all three categories which is sports, skills, expedition - and the most important for me - the service, which meant I worked as a volunteer for some time."

Together with the award you've also won a trip to Hong Kong. What does this trip involve?

"Actually it is an international meeting of those who received the golden award. It will take two weeks. We will solve different problems, for example how Edie can help in Africa or in poor countries or to do something really good." 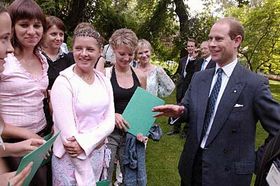 Prince Edward at the British Embassy in Prague, photo: CTK The Edie program was established by Prince Philip, the Duke of Edinburgh in 1956 to support the personality development and leisure-time activities of young people. Since than almost five million people from one hundred countries have taken part.

According to Pavel Zalesky from the Edie Program in the Czech Republic the scheme was established here twelve years ago.

"Till now we've had hundreds of participants who've had absolved the program successfully. Every participant had his own choice what he or she would do. There are straight rules; everyone must choose some kind of a sport, some practical skills, every one must undertake an expedition with the others and everyone must do some service in favour of a local community or charity. That means that everyone is not developing only physically but also in terms of other skills, in terms of personal responsibility as well as of social responsibility." In the last six decades, over five million young people in over 100 countries have participated in the Duke of Edinburgh Award scheme,… 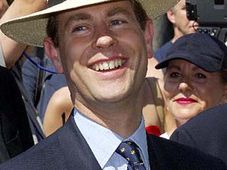 The renowned Czech spa town of Marianske Lazne, traditionally known as Marienbad, was on its feet on Monday morning, awaiting the…

Prince Edward, the youngest son of Great Britain’s Queen Elizabeth II, and his wife Sophie attended part of the rehearsal for the…