Prime minister urges Czechs to go to the polls

Czechs are voting in a historic referendum on joining the European Union. For the first time in the country's history, its people have the chance to decide about their country's future, and politicians have urged them not to let such an opportunity pass them by. On the eve of the big day, the Czech Prime Minister Vladimir Spidla went on national television urging Czechs to use their voting rights: 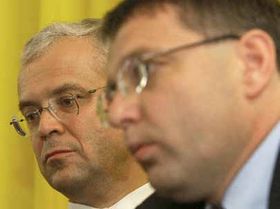 Vladimir Spidla and Lubomir Zaoralek, photo: CTK "I trust that the citizens of the Czech Republic are active, that they will go to the polls and not let pass up the opportunity to decide directly on such a crucial matter regarding our future. I expect a turnout of over 50 per cent, the more people use their voting right the better. A high turnout is of vital importance -not with respect to the referendum's validity, but because then our future course will be more firm and convincing."

Although the prime minister did not directly urge Czechs to vote "yes", all his arguments were strongly in favour of EU accession. He appealed to Czechs to use their "experience, their brains and their heart" in deciding the country's future.

Opinion surveys suggest a turnout between 60 and 70 percent. The number of voters who are in favour of EU accession is between 70 and 75 per cent, around 20 percent of Czechs have said they are against, while the number of undecided or unwilling to vote is at its lowest ever. Polling stations close at 2pm on Saturday, and the outcome of the vote will be made public within hours. If the outcome is "yes", the Czech Republic should join the European Union in a "big bang" expansion in 2004.