The annual Folkové Prázdniny (Folk Holidays) music festival gets underway in the south Moravian town of Náměšť nad Oslavou on Saturday. The week-long event takes place in the grounds of the town’s castle and features a broad selection of both international and Czech world and folk musicians. Ahead of the festival, I spoke to one of its organisers, Daniel Hejl.

“Folk Holidays is a festival of world music, but not only world music. It takes place in the pretty city of Náměšť nad Oslavou, quite close to Brno. It’s full of…stars who are not known here in the Czech Republic but they are known all around the world. And we are trying to bring them here…”

This year who are you bringing to the festival?

“I’d like to mention Hazmat Modine, a fantastic band from New York, with some of the best New York musicians. Today they are people who are playing with Tom Waits, with Norah Jones, David Bowie. They did really, really well at the last Womex, which is a world music festival.

“Then there’s Mark Geary, who’s an Irish singer. He’s a friend of Glen Hansard, [the late] Jeff Buckley, Damien Rice…he’s the last of these four who didn’t get famous, but in April he made a new album called Opium and it seems maybe now his time has come, so this could be one of the last chances where you can meet him playing by a fire and sing with him.”

Who in particular are you looking forward to seeing at this festival in Náměšť?

“I'm looking forward to Hazmat Modine. But as well what's really looking forward to is Tim Eriksen. He's a kind of 'reformer' of a music style called Sacred Harp, and it's really ancient, more than 200 years old. It's a style of singing without notes. It was done for people who can't read, and they wanted to sing together in America, songs in church. You could hear it in [the film] Cold Mountain - it was he who did it…He’s having workshops.

“There’s David Evans as well. He has a Grammy, and I think if you’re looking for somebody who knows something about blues he’s the number one in the world. So he’s another big star we have.” 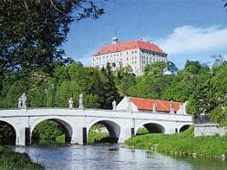 This year's Folkove Prazdniny, or Folk Holidays, festival begins in Namest nad Oslavou in south Moravia on Saturday. Among the main…

The Czech Republic is planning to buy 12 military helicopters at a cost of around CZK 10 billion crowns, Prime Minister Bohuslav Sobotka…