Wednesday is the 65th anniversary of the start of the Prague Uprising, when thousands of people took to the streets in an attempt to liberate the city from Nazi occupation, just days before the arrival of the Red Army. Several events have been held to mark the date, including a memorial at Czech Radio, which made a dramatic call on citizens to fight the occupiers on the morning of May 5, 1945. 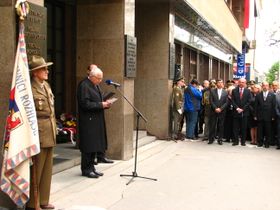 Václav Klaus, photo: Kristýna Maková Shortly after laying a wreath in front of the Czech Radio building on Vinohradská St at lunchtime on Wednesday, the Czech president, Václav Klaus, paid tribute to those who gave their lives in the fight for freedom in the dying days of World War II in Europe.

“It would have been logical to take the opposite approach, because the aggressor was on his last legs. They could have calmly waited for his end. People in Prague didn’t do that.”

The president, who will be 69 next month, also offered a personal recollection of the uprising.

“Unlike most of you, 65 years ago I was nearby at the moment the Radio called for help. I lived with my parents a short distance away on Tylovo náměstí, and as a small child I began to become aware of the atmosphere then. Even then I knew that the atmosphere was dramatic. I was there when a barricade was built on the corner of Bělehradská and Jugoslávská streets. It is not possible to forget that.”

Among the other dignitaries who took part in Wednesday’s ceremony was the Czech prime minister, Jan Fischer.

“By their actions the heroes who took part in the Prague Uprising 65 years ago, and whose memory we honour today, smashed one negative myth: that in their modern history Czechs have never fought. In reality, in every dark era there were those whose heroism won us the right to an independent existence.”

Martin Barták is the Czech defence minister. At a reception after the memorial, I asked him what he considered the significance of the Prague Uprising. 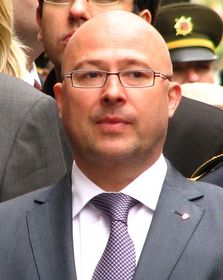 Martin Barták, photo: Kristýna Maková “I think it’s one of the most important dates in the history of the Czech Republic. We should commemorate it and remember all these heroes and all these people who took part in this…people’s movement. At this place, this institution, history has been written many times. This is one of this most important events, and all the most important persons like the president, the prime minister and the chairman of the Senate have come. I think this is right. It is also a message for our young people and young generations – not to forget it.”

By the time Prague Uprising ended with a ceasefire on May 8, 1945 around 1,700 Czechs had been killed. The following day Red Army soldiers liberated the city, ending six long years of brutal Nazi repression.