Just over ten years ago their countries split in decisively cool fashion - today political relations seem better than ever between the Czechs and the Slovaks. With Slovak President Rudolf Schuster on his first state visit to the Czech Republic since the election of President Vaclav Klaus, there is once again an emphasis on common goals and co-operation between both governments. To lead their respective countries into the EU; to find common ground within NATO; to deepen social, political, and economic ties. What about Slovakia in its own right? Radio Prague's David Vaughan caught up with the Slovak president a few days ago to discuss Slovakia's newly emerging role in Europe, as well as to ask how Mr Schuster saw recent European division over the US-led war on Iraq. 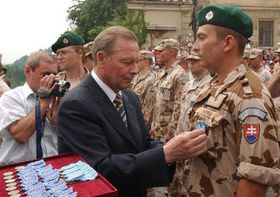 Rudolf Schuster and members of the Czech-Slovak anti-chemical unit from the war in Iraq, photo: CTK "Before the Iraqi war Europe was divided. I think now we are back. This country was criticised that it supported the US. For example Slovakia - we didn't change our mind, but what happened that the United Nations returned to the table, and the countries returned back, Germany, France, the others. So, the strategic position for us is Trans-Atlantic co-operation. The US, for us, will be a strategic partner in the future too. So, we used to say it was an episode was over, but our position was clear and will not change."

Do you see a possibility of playing a role as a bridge to the East? 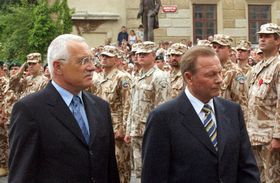 Vaclav Klaus and Rudolf Schuster, photo: CTK "I think, for example, of the Ukraine. That, again, is a country which is a bridge to Russia. We have to be very careful to co-operate with these countries, because they have an interest to come closer to Europe. For this reason we cannot have a new 'Iron Curtain' between us. They have to have a feeling, for the future, that we are counting on them."

Do you see any space for more clearly-defined, institutionalised co-operation between the states of Central Europe?

"I think it is very important to co-operate closer, but to use experience practically. When I look, for example, at Slovakia before '98 was criticised for a deficit of democracy, minority problems, and in a short time this was solved. So, we have to think about this for other countries that are on their way to the EU too, that we have to give them experience not do the same mistakes we have. I am thinking of Romania, Bulgaria, the former Yugoslav countries too. They first have to co-operate together, to find a way. And terms of an official group, I think maybe Visegrad is the way." 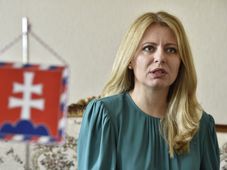