A bust of the late Chinese dissident and Nobel Peace Prize winner Liu Xiaobo is due to be unveiled at Prague’s DOX gallery this coming Monday. The ceremony is part of an event commemorating the 30th anniversary of the Tiananmen Square massacre. Among the guests will be Liu Xiaobo’s widow and two of the former student leaders. 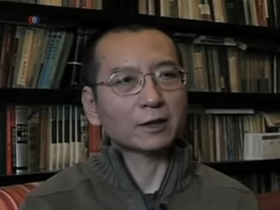 Liu Xiaobo, photo: Voice of America The event commemorating the student-led protests in Beijing’s Tiananmen Square is organised in cooperation with Amnesty International, the Vaclav Havel Library and the Václav Havel Library Foundation, and Humanitarian China, an organization promoting rule of law in China and raising money for Chinese political prisoners. One of its initiators is the Irish human rights activist Bill Shipsey:

“The primary reason of the event is to commemorate the 30th anniversary of the commencement of the Tiananmen Square protests, which started on April 15, 1989.

“And secondly we want to honour the memory of the great Chinese leader Liu Xiaobo who died in 2017 and for that purpose I commissioned a bronze bust of Liu Xiaobo together with another Chinese friend of mine, Fengsuo Zhou.”

Fengsuo Zhou, one of the former leaders of the Tiananmen Square protests, who currently lives in the United States, will also be attending Monday’s event at DOX. He hopes it will help to bring attention to the human rights situation in China:

“With this we want to commemorate Liou Xiaobo, remember his spirit and make sure that his ideal is still alive and that his legacy can bring change to China. 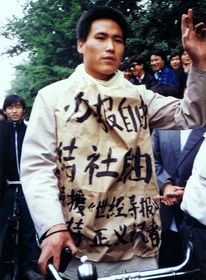 A photo of a student protester at Tiananmen on May 1989, photo: 蔡淑芳@sfchoi8964, CC BY 2.5 “To us it is very important to tell the world that China is a regime which treats its own people with cruelty and it can never be a force of peace in the world.”

The late dissident Liu Xiaobo was one of the founders of Charter 08, a Chinese human rights initiative directly inspired by Czechoslovakia’s Charter 77. The last time that he was imprisoned was in connection with the establishment of the manifesto, explains Mr Shipsey.

“He drew his inspiration from the Czechoslovakian Charter 77 drawn up by Václav Havel and others. And it was that Charter 08 signed by him and a number others that led to his arrest on December 8, 2008 and to him ultimately getting a prison sentence of eleven years from which sadly he never was released.”

Liu Xiaobo died in 2017 after battling liver cancer while on medical parole. He was the first Nobel laureate to die in custody since 1938.

One of the main guests at the commemorative event at DOX will be his widow, Liu Xia. The gallery will showcase an exhibition of photographs and poems she created when her husband was imprisoned. They exhibition will run until June 5, the day when the actual massacre took place in Tiananmen Square.

It is the second time her photos will be display at DOX. Her first exhibition took place back in 2014, when Liu Xia was still under house arrest. She has since been released and is currently living in Germany.