The Orloj, or Astronomical clock, on the Old Town Square is one of Prague's major tourist attractions. Every hour, the square fills with tourists who watch two small windows on the clock tower, waiting for the regular procession of apostles. Recently, however, the walls of the clock tower have grown increasingly damp and conservationists fear that dust from the moist plaster might cause mechanical problems for the ancient clockwork.

In the long history of the Astronomical Clock, which dates back to the 15th century, it is the first time it is facing a problem with dampness. This week, conservationists took plaster samples from the tower and sent them to the laboratory for chemical analysis. The results are somewhat surprising:

The walls of the Old Town Hall are contaminated by salt, conservationist Ondrej Sefcu of the National Heritage Institute told the Czech TV. He explained the salt drew water and therefore functioned as a major cause of dampness.

The question remains, how did salt get into the Old Town Hall's clock tower in the first place? Experts say there are two reasons: one is the increasing use of salt on icy pavements in the winter. Another reason is old sewage under the Old Town Hall, which has been there since it was built some 600 years ago, when Prague didn't have a proper sewage system. 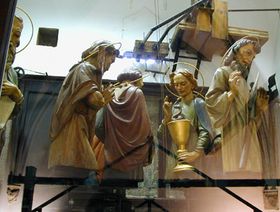 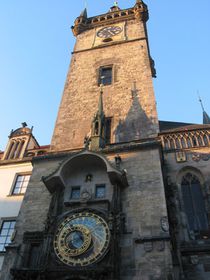 Other measures to prevent further contamination are yet to be discussed. But Prague Town Hall has already suggested the square and the nearby streets should not be salted in winter.

Ludvik Hainz, whose family has been looking after the clock for almost 150 years, checks the clock regularly every single week. He says the problem is not as serious as it seems:

"It's very important to realise that the astronomical clock is a machine from the 15th century. The system of astronomical clock is very old and technically primitive. Everybody knows very well that an old car has more malfunctions than a modern one. The same is valid for clocks. Technical equipment from the 15th century has more malfunctions than a modern clock."

The Prague astronomical clock, commonly known as the ‘Orloj’, will reopen in the last week of September after 9 months of reconstruction.… 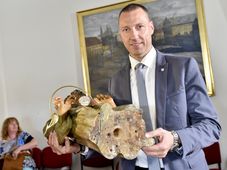 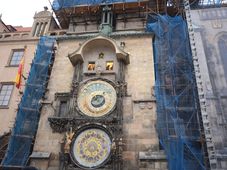 Astronomical clock to regain some, but not all, original parts

One of Prague’s most famous sights, the astronomical clock at the city’s Old Town Hall, has been temporarily removed. The medieval…