The Prague City Assembly has approved a project to build a four-kilometre cycling path in the former industrial district of Vysocany. The overall cost is estimated at 86 million crowns (around 4 million USD). The opposition at the city hall argues that the cost per kilometre is about four times higher than usual. City Councillor Petr Stepanek of the Green Party, himself an active cyclist, argues that the project is more than just a stretch of tarmac.

"The opposition is indeed right it that is too much for a bike path. But the project is not a bike path construction as such. It is a renewal project in a brownfields area where for over a hundred years Prague had its industrial core. We were lucky to be able to acquire the property: a formal railroad bed in this industrial area and surrounding land. Now we are revitalising it into a park that has a bike path leading through it. So the bike path costs what other bike paths cost everywhere but the entire revitalisation project is much more expensive. The second matter that is important for the future users is that we will have eight crossings above existing roads and therefore the cyclists will never meet a car on this four-kilometre stretch."

Exactly five years ago we spoke at the opening of a cycling path in the Vysehrad district in Prague. At that time you complained about a scarcity of bike paths in the capital. Has the situation changed since? 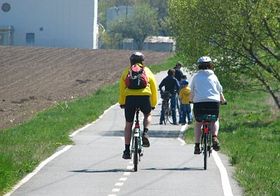 "I complained about a lack of bike paths and a lack of funding for bike paths. This year if we count together what we have for general projects, it's 39 million crowns. If we count maintenance money, it's another 7 million. Then it's about 10 million in subsidies to boroughs and then the project we just spoke about at a cost of around 80 million crowns - so the funding for bike paths went significantly up. New stretches are under construction and the situation is improving rapidly."

And how about the centre of Prague? It still seems to me that there are quite a lot of pedestrianised streets but not enough cycling paths...

"We try to open up pedestrian zones in the centre of Prague, in Prague 1, to cyclists. It works really well, there are no conflicts. Now we will be working with Prague 2 and 3, 4, 5 and 7 to do the same in those municipalities and allow pedestrians and cyclists through the narrow streets of older parts of town, opening them to non-motorised traffic." 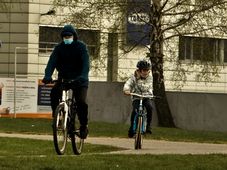 Czechs cycling through the COVID-19 crisis

The COVID-19 crisis leads to some unexpected positive trends. Many Czechs have exchanged their cars for bicycles. In fact, so many… 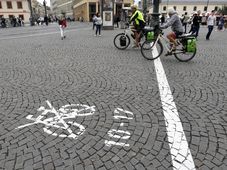 A divisive ban on cycling in areas of downtown Prague has been overturned following a legal challenge from an activist group. Cyclists…