The opening ceremony will be staged today for the biggest athletics event the Czech Republic has staged for almost four decades – the European Athletics Indoor Championships. And hopes are high that home advantage and enthusiastic fans will spur a record Czech contingent onto the winners’ podium. 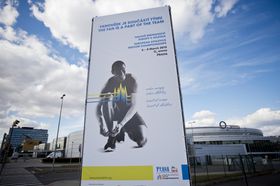 Photo: CTK The heart of Europe: the heart of athletics, that’s the core message from Prague as it hosts the biggest athletics event in the country for almost four decades.

After Thursday evening’s launch ceremony for the 2015 European Athletics Indoor Championships, Prague will be the centre of attention for European and worldwide athletics fans for three consecutive days ending on Sunday.

The last time the Czech capital staged such a prestigious event was way back in 1978 when the city’s imposing Strahov stadium hosted the European Athletics Championships. The three countries with the biggest medal haul back then, the Soviet Union, East Germany, and West Germany, are no longer around. The then Czechoslovakia won a modest five medals, two silvers and three bronze.

Preparations in Prague have been ongoing in one way or another since even before 2012 when the city was awarded the indoor championships. Earlier attempts to land some significant championships, such as in 2009, had been thwarted. 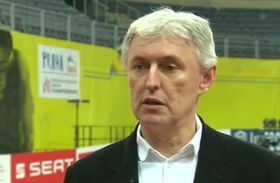 Libor Varhaník, photo: CT24 Around 650 athletes from 49 countries have already converged on Prague for the events taking place in the multi-purpose O2 arena. The Czech contingent is the biggest ever at 46 and one major theme for the organisers has been the idea of getting Czech fans to believe they are an integral part of the team.

Chairman of the organising committee Libor Varhaník explained. “We came up with a campaign and came to the conclusion that we wanted a record number of athletes in the Czech team. So when we came to talk about having 45 or 46 athletes, which was eventually achieved, we said to ourselves that this is really a sizable team and that it would be even bigger if the fans were really part of it. I think we have achieved this because ticket sales have been going really well so far.”

And hopes are high that local advantage and enthusiastic fans will help the Czech team to surpass the solitary gold and four bronzes taken away from the winner’s podium at Gothenburg, Sweden, two years ago when the indoor event was last held. 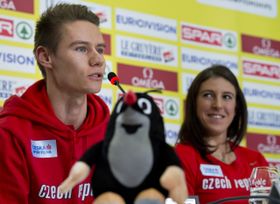 Pavel Maslák and Zuzana Hejnová, photo: CTK An individual gold and relay bronze medal winner back then, Pavel Maslák has his sights firmly set on defending his 400 metre indoor title and also reckons the Czech relay team has a chance again to be in the medals again.

He had this to say at a press conference midday on Thursday. “I am really glad that this is happening here in the Czech Republic because it will be a new experience for me and I will be able to compete in front of my family and the Czech public. And I hope that I will be able to put in a world beating performance.”

Other medal prospects are Zuzana Hejnová, who is looking to step up and compete in the 800 metres, and Lenka Masná in the same event. Czech hopes will also be high in the shot put, pole vault, hurdles, high jump and pentathlon.