Prague has become the focus of attention for hundreds of Romanians as they follow the fight for life of a 17-year old boy. Many have travelled to the Czech capital to be nearer the hospital where he is being cared for and have set up camp at sites around the city. 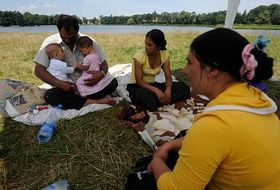 Photo: CTK The Romanian teenager is a “prince” of an extended Roma family which has thousands of members. He was almost drowned when he went swimming last week in a town outside Prague and has been fighting for his life since then in hospital.

News of the accident has drawn hundreds of relatives and well wishers to Prague to be nearer their “prince” who has been on life support in the hospital. His condition is still critical and his chances of survival are given at a bit better than 50-50.

Many of the Romanian Roma, however, have nowhere to stay in the Czech capital and little money to support their stay. Czech Roma activist Štefan Ličartovský helped to collect money to put around 100 of them temporarily up at a Prague camp site. He explained the significance of their vigil. 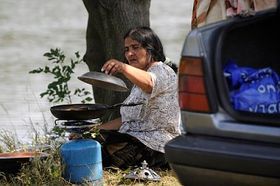 Photo: CTK “This is really important because first of all he is the son of the king – the successor. But there are also relationships between family and friends. But in short, this makes no difference because when someone is ill you care for them and get together to show that you love them”

The influx of the Romanian Roma has not been without its logistic problems with groups now scattered across the city and police keeping a close eye on them. They say they will not leave until the fate of their prince is clear. 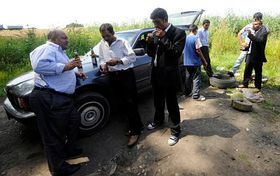 Photo: CTK After moving out of the camp site on Monday, one group set at a popular bathing site on the edge of the city which is also a nature reserve. Mr Ličartovský says their vigil should be respected and they should not be interfered with there in spite of the lack of facilities.

“They can bathe there and stay there overnight in tents – it is not banned. They are currently tourists. I would not politicise this and no do anything at all with regard to them. They are tourists and it is a bathing site at Počernice. They are just there as tourists.”

Many of this group have now moved on. And, for the moment at least, Mr Ličartovský’s plea that the authorities do not get involved in one way or another is being respected.