A high-profile conference on strengthening common EU security and defence cooperation, hosted by the Czech Prime Minister Bohuslav Sobotka and the President of the European Commission Jean-Claude Juncker, is taking place at Prague’s Žofín palace on Friday. In his opening speech, the Czech Prime Minister said the European Union must be able to guarantee security on the continent. 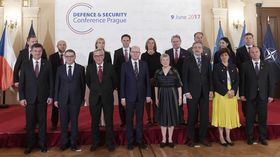 In his opening speech, Prime Minister Bohuslav Sobotka said the European Union had always been a key instrument to guarantee peace in Europe but it also has to become responsible for all EU nationals to threats coming from the outside:

“If it wants to secure its role of a significant global leader, it must be able to help solving conflicts quickly and effectively, reinforce stability, prevent threats coming from the outside and contribute responsibly to international security. Only then it can be regarded by its citizens as a real guarantor of security.”

The President of the European Commission Jean-Claude Juncker echoed Mr Sobotka’s words, saying that it was the most basic and universal of right of EU citizens to feels safe and secure in their own home.

“Europeans widely expect their union to provide it for them to make it happen. European leaders addressed the calls three months ago in signing the Rome declaration. Together they committed to strengthening European security and defence by doing more and by cooperating closer.”

Mr Juncker also stressed there was a need to address the long-standing fundamental question about the sovereignty of EU member states: 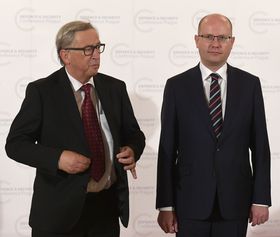 Jean-Claude Juncker, Bohuslav Sobotka, photo: CTK “Many of our member states consider defence as a matter of strict natural sovereignty. But sharing sovereignty does not mean forgoing sovereignty. On the contrary: having stronger and more sovereign member states in a globalised world requires having more cooperation within the EU, especially on defence.

“Systematic defence cooperation and further integration will contribute to the preservation of natural sovereignty. This is the natural conclusion of the changing realities around us. How long can we pretend that countries so intimately linked as we are in EU do not also need to face external threats together?”

Prior to the conference, Mr Juncker expressed disappointment at the recent decision of the Czech government not to accept any migrants within the quota system.

In his speech at Prague’s Charles University on Thursday, he said the Czech Republic should show solidarity in dealing with the refugee crisis as it accepts aid from the European Union. At the same time, he is against the country being stripped of EU subsidies as a result of its stance on the quota.