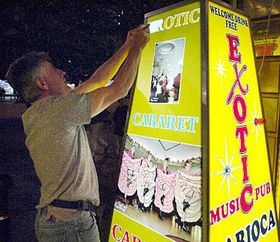 On the first day and night, police reported around 50 offences, mainly concerning billboards and in one case a limousine featuring the name and logo of one of the clubs parked in front of it. Eleven people were fined on the spot and 40 other cases were reported to trade offices who can fine individuals up to 100,000 crowns (around 4,000 dollars) and businesses twice as much.

It's still early to tell whether the by-law really can keep the oldest trade under control in the centre of Prague. Anyway - the red and white limo that was two days ago found in breech of the by-law - is again back in its old place.

The award no ad-man wants to win: the Sexist Piggy Prize

The latest advertising contest underway is one that competitors will not be keen on winning. The Sexist Piggy prize goes to the advertiser…