The Václav Havel library, in cooperation with photographer Pavel Hroch, has recently launched an online exhibition called ‘The Faces of Resistance’. The project presents portraits and texts about 50 people who over a span of many decades stood up to political repression and brutality and who in certain moments displayed courage and a will to freedom. Vratislav Brabenec, photo: Pavel Hroch Vratislav Brabenec, one of the members of the legendary early 1970s underground band the Plastic People of the Universe, Karol Sidon, the chief rabbi of the Czech Republic or František Wiendl, who helped to smuggle people across the Iron Curtain, are just some of the 50 people included in the project called The Faces of Resistance.

The author of the black and white portraits, Pavel Hroch, explains how the project was initiated:

“I realised there are many very interesting people who might not be that well-known, and who have brought maybe even bigger sacrifices. I wanted to meet some of those people so we arranged to create a series of 50 portraits accompanied by CVs.”

“I first started taking pictures of people who were in the resistance, who tried to resist totality in the 1950s. I also managed to take pictures of two RAF pilots or the head of a partisan squad from the Slovak Uprising, but our goal was to show different forms of resistance, not just political prisoners, or dissidents.

Among the lesser-known people featuring in the online gallery, is for instance František Brož, the only private farmer in the entire Havlíčkův Brod district who resisted the Communist Era collectivisation. 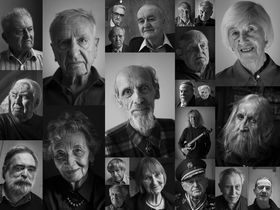 ‘The Faces of Resistance’, photo: Pavel Hroch Or Pavel Runkas, who secretly constructed a hot-air balloon to fly over the iron Curtain, but ended up in prison after he was arrested by the secret police on the basis of an anonymous tip-off.

“Originally, we didn’t know what the outcome would be. All we knew was that it was important to meet those people, many of who were already quite old, take their picture and record their testimony.

“Only then I approached the Václav Havel Library, with whom I had already cooperated on my previous exhibition called Passion for Freedom about the Velvet Revolution.”

The black and white portraits of people, who between 1939 and 1989 succeeded in standing up to evil and risking their lives, is accessible through an online Google platform called Google Arts Gallery. Pavel Hroch, photo: Carlos Ferrer Meanwhile, photographer Pavel Hroch continues with the project, discovering more ‘faces of resistance’ not only in the Czech Republic but also in neighbouring Slovakia and also among the younger underground generations.

In the future, he also plans to include videos, in which people will describe the impact of the Communist regime on their everyday lives, their experience with the political transformation, and their view on the current political situation.