The Social Democratic Party, which effected an unexpected change-of-guard at the top post last week ahead of the autumn general elections, unveiled its election program at a party conference at the weekend. The party is promising voters lower taxes, an average salary of 40,000 crowns a month within five years, more generous welfare benefits for families with children and better health care. But how realistic is the programme and can the effected personal changes turn around the party’s dwindling support. Those are questions I put to political scientist Jiří Pehe. 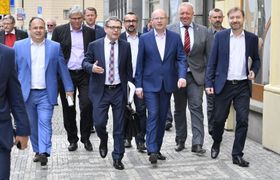 Social Democrat leaders, photo: CTK “Well, I think that the programme of the Social Democratic Party is realistic only to the extent to which the Social Democrats can win the elections or have a good result in the elections. What I mean is that their proposal to lower the taxes of 90 percent of Czechs and at the same time increase the taxes of big corporations and banks will probably run into a wall when it comes to the other parties and since they do not seem to have any prospect of having a leftist coalition partner after the next elections I think that it is just a proclamation and that’s what it will remain.”

The party has been taking radical measures to turn its fortunes around at the eleventh hour so to speak –can the change of guard and this election program prove successful?

“I think that what can work for the Social Democratic Party is the change of style which Mr. Zaorálek who is now the party’s election leader can perhaps deliver because he is from a different mould than Mr. Sobotka, but at the same time I think that what Mr. Zaorálek and the others presented at the party program conference this weekend is not anything that would generate great enthusiasm among the voters who have withdrawn their support of the party. So, yes, Mr. Zaorálek is a good speaker and he can inflame emotions so that I am sure he will do well in television discussions with Mr. Babiš, the party’s main rival, but that’s about it and we do not really know whether this will be enough to increase the chances of the Social Democratic Party of doing well in the elections.” 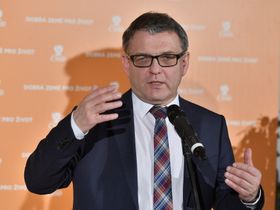 Lubomír Zaorálek, photo: CTK Who are the voters that the party is targeting? Who are voters it has lost?

“Well, I think that the party is going after lower-educated people from small towns and villages, the kind of people who frequent Czech pubs, which is apparent from Mr. Zaorálek’s statement that if it were up to him he would not have been so draconian when it came to the anti-smokers law and Czech pubs could have been exempted from this. I think that he is trying to strike a chord with people who would –under different circumstances – be Social Democrat supporters but they have defected to Mr. Babis because he is more populist at this point.”