The first round of the Czech presidential election was considerably more exciting than many had predicted. A poor showing by long-time poll leader Jan Fischer saw him knocked out, while Foreign Minister Karel Schwarzenberg caused an upset by taking almost a quarter of the vote to reach the runoff. Miloš Zeman came first, but with Mr Schwarzenberg’s momentum it looks like being a very gripping race for the Castle. 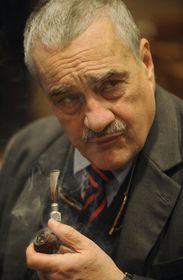 Karel Schwarzenberg, photo: CTK Karel Schwarzenberg performed an improvised rendition of the Czech national anthem in the middle of a news conference on Saturday afternoon, reflecting the euphoric atmosphere at his headquarters. Mr. Schwazenberg earned a surprising second place in the election’s fist round, and will face former Social Democrat prime minister Miloš Zeman in the runoff in 11 days’ time.

At the age of 75, Karel Schwarzenberg succeeded in persuading more than 23 percent of voters that regardless of his involvement in the unpopular current government, he represented a change that so many Czechs desire after a decade of Václav Klaus.

Mr Schwarzenberg did not rank highly in most opinion polls ahead of the vote but had a very powerful campaign finish, mainly thanks to clever use of social media. He did best in most big cities and especially among the young. Jindřich Šídlo is a commentator for a leading Czech daily, Hospodářské noviny. I asked him how he thought the aging politician had managed to win the backing of the Facebook generation.

“I don’t know. I simply don’t know. Maybe he doesn’t look like an ordinary politician. He’s attractive because he’s different and doesn’t remind people of the usual type of the Czech politician in a grey suit. He’s funny, and he had strong support from the arts and intellectual community who could have influenced young people. But it’s something very unusual and almost unbelievable.” 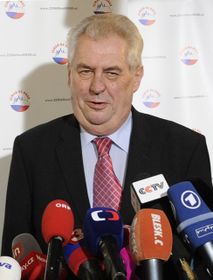 “Mr Fischer really had time running against him. His best tactics would have been to stay out of the limelight. But instead, what he did in the past week under pressure from the media was to go on two main debate shows and in both of them he showed his weaknesses.”

The campaign ahead of the election’s second round has already begun. In his remarks after the vote on Saturday, Mr Schwarzenberg called his rival a man of the past, referring to Miloš Zeman’s role in a controversial power-sharing deal with Václav Klaus in the late 1990s.

Meanwhile, Mr Zeman has made it clear his strategy over the next two weeks will be to showcase his opponent’s responsibility, as deputy prime minister, for some divisive steps taken by the centre-right government, such as tax hikes, a pension reform, and church restitution. Political analyst Jiří Pehe believes the candidate who prevails in shaping the central issues of the debate in the next two weeks will have the biggest chance of reaching Prague Castle. 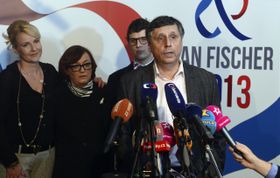 Jan Fischer, photo: CTK “It will be basically a struggle between the continuation of Václav Klaus, which is represented by Miloš Zeman, and what one could broadly describe as nostalgia for the times of Václav Havel. That in the end might decide the elections. But I think it will be difficult for Schwarzenberg to force a narrative that would portray him as an heir to Václav Havel.”

Much will also depend on the voters who in the first round supported some of the unsuccessful candidates, mainly Jan Fischer and Jiří Dienstbier, and on whether the tight race will bring more people to the ballots than the 61 percent who turned out last weekend.