Police have asked the lower house to waive parliamentary immunity in the case of MPs Andrej Babiš, the leader of the ANO party, and his deputy chairman Jaroslav Faltýnek. The police are pursuing an investigation regarding the Stork’s Nest – a recreation centre and hotel complex which belonged to a firm owned by Mr Babiš’ agro-chemical giant, Agrofert. The company received a 50 million crown EU grant for small and medium sized companies in what may have constituted fraud. 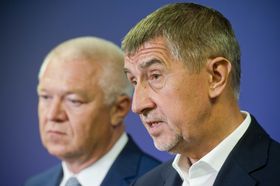 Jaroslav Faltýnek, Andrej Babiš, photo: CTK The Stork’s Nest affair first flared up last year, prompting an investigation by the Czech police but also the European fraud office. The investigation took a big step forward on Thursday when the police formally asked the lower house to strip two of the main actors involved, ANO leader and former businessman Andrej Babiš and party deputy Jaroslav Faltýnek to be stripped of parliamentary immunity. Mr Faltýnek said he would not try and prevent any moves regarding the police investigation but stressed he was being victimised by the police and his party leader, Andrej Babiš went further, calling the step part of a political battle to discredit him as a politician ahead of the autumn election.

“I don’t understand what the police are building on. It is basically a sad last-ditch effort to by those who ordered it, to prevent me from running in the election this fall.” Miroslav Kalousek, photo: Filip Jandourek Mr Babiš added that he had a meeting with investigators not long ago, where he said he was told he was a witness, not a suspect. In the case 50 million crowns in EU funds went to a firm which, at the time was not owned by Agrofert but had been transferred to Mr Babiš adult children and his son-in-law. The politician maintained from the start that he had done nothing wrong and in the public eye, the scandal had little effect on his party’s popularity: polls before and since routinely placed ANO as the clear favourite in the upcoming election; some analysts suggested on Thursday that potential fallout over the Stork Nest affair could change that.

Following the police request, politicians across the political spectrum from the ruling Social Democrats to TOP 09 to the Communists, indicated they would likely back the motion to strip Mr Babiš and his fellow MP of immunity. TOP 09’s Miroslav Kalousek:

“There are two things the police request can pertain to: either Mr Babiš’ crown bonds or the Stork’s Nest. If it is either of those two things, I can tell you we will unequivocally support the motion. If it is about something else, then we’ll see.” 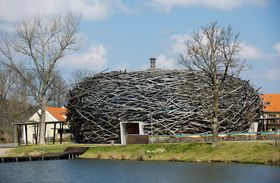 Stork’s Nest, photo: CTK Former speaker of the lower house and member of the Civic Democratic Party, Miroslava Němcová, responded to the timing of the police request so close to the next election.

“I have to trust in the professionality of the police and that the investigation had reached a stage where it was not possible to hold off the request and wait until after the election. That would be a clear double-standard.”

The police request will now have to be discussed by a special lower house committee; MPs could then address the matter in their first post-holiday session on September 5. Million Moments for Democracy, the anti-government protest movement that brought hundreds of thousands of Czechs onto the streets last…

In his first ever New Year’s address to the nation, Prime Minister Andrej Babiš told Czechs they had reason to celebrate since they…