The 40th Karlovy Vary International Film Festival, one of the country's biggest annual cultural events, has come to an end. Held every year in the picturesque west Bohemian spa town, a record 142,506 viewers - almost 20,000 more than last year - flocked to see 517 screenings. On Saturday, the festival closed with its traditional award ceremony. 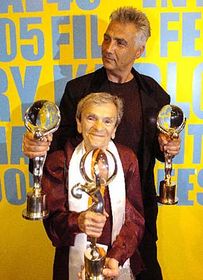 Krzysztof Krauze and Krystyna Feldman, photo: CTK The Crystal Globe for Best Feature Film went to Poland's "My Nikifor", which tells the story of a physically and mentally disabled painter Nikifor Krynicki, who makes it to fame in Poland, despite living in his own simple world. It was directed by Krzysztof Krauze, who also received the Crystal Globe as Best Director:

"I am very happy about the awards because this film represents five of my most hard-working years in filmmaking. It took just a few months to make the movie but it took five whole years to prepare and gather the material for it!"

To the surprise of many, the role of Nikifor was not played by a man but a very jovial and energetic 80-year-old woman - Krystyna Feldman, who won the Best Actress award for a performance that the grand jury unanimously agreed, was stunning and very convincing:

"This means a lot to me because it is a prestigious award, given by film critics, actors, and other experts in the field. Such an award helps an actor like me grow new wings to rise again." 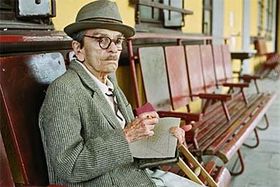 'My Nikifor' Besides feature films, two other categories were in competition this year. The Best Documentary Film under 30 minutes was a Belarusian production by director Galina Adamovich called "My God". "Estamira" from Brazilian director Marcos Prado won the Crystal Globe as Best Documentary Film longer than 30 minutes. The winner of the third category called East of the West, featuring films from the Middle East and the former Soviet block was the Russian-Austrian co-production "Ragin", directed by Kirill Serebrennikov.

For a complete list of winners and synopses of the movies screened please visit the official festival website at www.iffkv.cz