At the start of The Invisible Men, which is being shown at the One World festival of human rights documentaries in Prague, a gay Palestinian named Louie describes how his father – on discovering his sexual orientation – brutally attacked him, slashing his face open with a knife. Louie has moved to Israel where he is relatively safe (and even wears a Star of David to blend in), but he faces great uncertainty every day. Prior to a screening, the film’s Israeli director Yariv Mozer outlined the predicament of such “invisible men”. 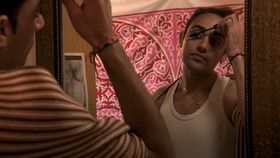 'The Invisible Men', photo: archive of the One World festival “They need to run away and the only place that they can run to is Israel. But in Israel they are illegals, so they need to hide. Therefore they don’t really have people to address. They’re afraid of everyone. It’s like an underground community of gay Palestinians who live in Israel.”

At the beginning of the film there are a couple of titles, including one saying that if these men are returned to the Palestinian territories, which they have to be under Israeli law, they will face “certain death”. I’m sure the environment they would face would be hostile, but would they really face “certain death”?

“Well, during the years we know of several cases of people that vanished, of people who we have no trace of any more. After they came to Tel Aviv they talked, they told their story. Then they had to move back home and we lost track of them. So death is something that could happen. It’s not a fantasy – it could happen.”

What’s shocking is that the threat can come from members of their own families.

“Yes, because in traditional societies – in religious societies, as we know, all over the world, not only in the Muslim world, it’s not unique to Palestinian society – it’s a big sin to be homosexual. It harms the respect of the family.

One thing that struck me was that this character Abdu says, everybody in the Middle East hates everybody else. And I guess these guys have even more hatred coming towards them. 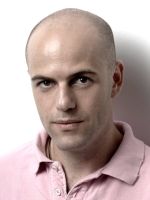 Yariv Mozer, photo: archive of the One World festival “Yes. This is why I thought that I must do this film and show this story of gay Palestinians, because I think they became the biggest victims of the Israeli-Palestinian conflict. Everybody suffers from the conflict, especially the Palestinians. But gay Palestinians suffer much more.”

And the only solution ultimately is for them to leave?

“Yes, unfortunately Israel doesn’t agree to give them asylum, so they need to apply for asylum outside of Israel in third countries. Not so many are willing to give them asylum but there are a few that do. This is what they must do. They need to eventually leave Israel and Palestine forever.”

And as we see in the film, that comes at a cost, because they lose their culture, they lose what they know.

“They lose their identity. The first time they had to lose their Palestinian identity and embrace the Israeli identity, in order to survive, in order to protect themselves.

“And then they need to lose whatever identity they’ve gained so far and now they’re in a new country, new culture, language, everything. It’s really hard for them. But at least they get their life back.”

In the film we see towards the end that two of the three are now living abroad. How are they doing?

“In fact all three of them are now living abroad. They’re suffering from longing for their families and their society and everything.

“But at the same time they have a new life. They earn money for the first time, they study. They’re legal. So this is in a way a good ending.”