Only three days since the government delegation, led by Prime Minister Vladimir Spidla, returned from talks in Italy, and its position on the EU Draft Constitution has come under fire at home. Though hardly surprising - the debate - called for by the opposition Civic Democrats - was something Prime Minister Spidla indicated he would take seriously. 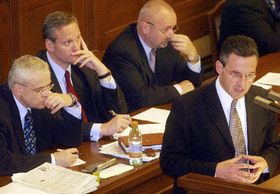 Jan Zahradil spoke out against the current government stance, photo: CTK Tuesday, 10 a.m., the Chamber of Deputies: the government presents its report on the opening of the IGC - the Intergovernmental conference in Rome, aimed at finalising the EU's constitution - once and for all. Appearing in the Chamber of Deputies to debate the current draft - the prime minister reported on progress at the weekend and interests the delegation aimed to uphold, among them fair representation for the Czech Republic within the EU as a whole.

But it was with some of these same points that the opposition found the most contention. Opposition deputy and shadow foreign minister Jan Zahradil spoke out against the current government stance - especially on the proposed system of qualified votes - he felt there the government had agreed a priori on a position that was not in the national interest.

"What happened in Rome was that it was a display different opinions amongst many countries - it was also a display of power politics - realpolitik - where bigger states or European powers like France or Germany were trying to push others into a corner, and I would say were even trying to blackmail these countries."

Also a point of contention for the opposition deputy: the Czech government's failing to debate the issues in the lower house - before - and not after - talks began in Rome. By consequence, he indicated, any weak result now would be solely the government's fault. Prime Minister Vladimir Spidla, photo: CTK "The government decided to take the full responsibility for the results, the government did not make any consultations with the opposition, or at least the main opposition party, and the government was well aware that there were different opinions of the European integration process and especially certain aspects of the so-called constitution treaty. However, the government made its decision and will have to bear the responsibility. We will evaluate the government on its result, and not on its intentions."

Overall, it has to be said, the EU's Draft Constitution is something the opposition Civic Democrats would rather see the EU without. Jan Zahradil himself admits he would be happier if the Czech Republic joined the union on the strength of its accession treaty and former agreements alone. That's not a likely possibility - with so many different interests involved - and delegations at the IGC striving overall to reach a compromise on a final version of the constitution. On the other hand, the government has promised to put forward a referendum bill once the final document is agreed. And, if it keeps to that promise Czechs may be able to decide for themselves whether to ratify the new document or not.