A controversial bill on electronic cash registers intended to fight tax evasion cleared the lower house on Wednesday. The opposition TOP 09 and Civic Democrat parties, who have fought the legislation tooth and nail, now say they will take the matter to the Constitutional Court. Bohuslav Sobotka, Andrej Babiš, photo: CTK It was a dramatic end to a drawn out and contentious parliamentary process which begun back in June 2015. PM Bohuslav Sobotka and deputy PM Andrej Babiš expressed satisfaction at the result of the final vote. But the opposition TOP 09 and Civic Democrats parties reacted with threats to have the Constitutional Court examine the legality of a parliamentary vote held earlier in the day, which effectively forced an end to debate with more than 40 MPs still formally left waiting to speak. The filibuster-ending procedure led to harsh words in the lower house from TOP 09 leader Miroslav Kalousek: Miroslav Kalousek, Roman Sklenák, photo: CTK Ultimately, out of a chamber of 200 deputies, only 145 partook in the final vote. The coalition trio of the Social Democrats, ANO and the Christian Democrats gained a decisive majority of 105 aided by 5 votes from Úsvit and independent MPs. Only three votes were formally cast against the legislation, with the communists abstaining and both TOP 09 and the Civic Democrats refusing to even vote.

Proponents argue that electronic cash registers, which create a record for every transaction, will reduce VAT fraud and bring in CZK 18 billion in extra revenue without the need to raise taxes. But the right-of-centre opposition says EET – as it is known in Czech – will create unnecessary red tape for small business owners and the self-employed.

Speaking to Czech Television after the vote, finance minister Andrej Babiš explained that the coalition forced the matter because they believed TOP 09’s Miroslav Kalousek and others were wasting floor time by debating irrelevant issues:

“We spent 236 days, and more than 40 hours debating this legislation… The debate was leading nowhere, and the remaining speakers had already spoken previously.” 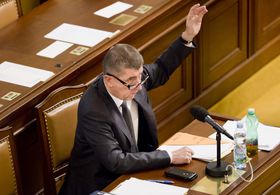 Andrej Babiš, photo: CTK Babiš also expressed confidence that the Constitutional Court would not threaten the legality of the new EET legislation:

“We have had the legislation analysed by constitutional experts and believe that the Court will rule in our favour.”

The legislation is not expected to encounter any further hurdles in either the Senate or with President Zeman.