Opposition Civic Democrats will strive to bring down government

The strongest opposition party in Parliament, the centre right Civic Democrats have declared their intention to try to bring down the three-party coalition government and trigger early elections. The public announcement made by the party's leader Miroslav Topolanek, comes in the wake of a fresh blow for the governing coalition: one of its deputies broke ranks on Tuesday, seriously endangering the government's razor thin majority in the Lower House. 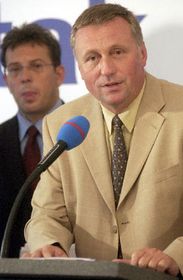 Miroslav Topolanek, photo: CTK The viability of the fragile governing coalition is now seriously under question. Infighting within the strongest party in government, the Social Democrats, has reached a head at the worst possible time -with a crucial fiscal reform package on the table in Parliament and the need to approve next year's budget in the autumn. At this point the governing coalition cannot rely on all of its 101 votes in the Lower House -and the Prime Minister has just three alternatives: to make a deal with the rebel deputies of the coalition government and meet whatever demands they make, to do the same with the communists, the second strongest opposition party in the Lower House, or to reach some kind of deal with the leading opposition party of centre right Civic Democrats. The leading opposition party however is not willing to negotiate - it stands too much to lose by consorting with a loser. The party is on the way up, with surveys indicating that it would win a landslide victory if elections were held today. So, early elections would be ideal for the Civic Democrats, but as the party's shadow foreign minister Jan Zahradil explains, they are not easy to trigger.

"Constitutionally, it is very difficult to trigger early elections. It is impossible without a Constitutional amendment and we see very little chance that early elections could be called without broad political discussion or some political arrangement. Whether there will be a will to do that -like in 1997/98 - that is a question, but it is one possibility. Without early elections we are not willing to share any responsibility within any possible new coalition."

The leader of the Civic Democrats Mr. Topolanek has said that the party will use all legal means to bring down the current governing coalition, which obviously means cooperating with someone. Are you prepared to cooperate with the communists on this, would they cooperate with you to bring down this government?

"I do not believe that the communists want to see this government fall. In fact, I think they want the exact opposite. The communists work on the assumption that the weaker this coalition is, the stronger their own potential, because if Prime Minister Spidla loses the support of his own MPs he will try to find supporters among the communists. So I do not rely on any cooperation with the communists as regards the fall of this government."

Would the Civic Democrats be prepared to take on the responsibility of government -with all that it entails, the reforms and everything?

"If there were to be early elections and if we won the elections we would be prepared to take on that responsibility, and as the strongest subject of some possible future government we would strive to include into a governmental programme some of our major programme priorities."