The smiling face of speed skater Martina Sáblíková has been all over the Czech media since she won gold at the Winter Olympics on Sunday. The Czech Republic has almost no tradition of speed skating, and no training course, and Sáblíková’s success represents the culmination of a sporting fairytale. 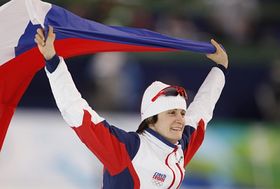 Martina Sáblíková, photo: CTK Martina Sáblíková was 11 years old when speed skating coach Petr Novák, on a visit to her parents’ flat, noticed her playing hockey on roller skates. He recognised her talent and recommended she come along to training and try out on the ice.

Two years later, when she was 13, Novák told Sáblíková she would one day win gold at the Olympics. People thought he was off his head, but the trainer was a driven man, even going on welfare so he could dedicate himself to coaching. 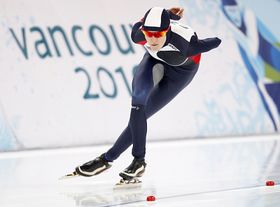 Martina Sáblíková, photo: CTK The biggest single problem he and his most promising skater faced was a lack of a proper training facility. The Czech Republic has next to no tradition of speed skating and no dedicated course, so they had no choice but to make use of frozen fish ponds in winter and focus on other forms of exercise in the summer months. Together the two put in thousands of hours of hard work.

Martina Sáblíková, who is slight framed and seems quiet, began competing at senior level at the age of 15, and prior to Sunday’s triumph in the Olympics had won every other trophy going. She also holds the world record in her preferred distance, the 5000 metres. Though still only 22, for some years she has been described as the greatest Czech speed skater of all time.

There is a great chance Sáblíková will take a second gold in the 5000 metres next week. But her marvellous success in the 3000 metres on Sunday could perhaps be enough to spur the realisation of another dream: the building of a dedicated long track speed skating centre in the small central Bohemian town of Velký Osek where she and Novák are neighbours. 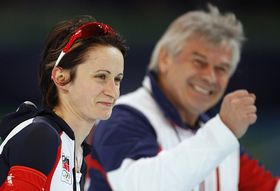 Martina Sáblíková, Petr Novák, photo: CTK The project was first mooted when it became clear just how successful Martina Sáblíková could be, though for some years plans have been gathering dust. However, according to the mayor of Velký Osek things may soon speed up. He says an unnamed sponsor is preparing to invest CZK 1.5 billion (nearly USD 80 million) in the multipurpose arena. But that would only cover construction; the state would need to pay for running costs.