The Czech hockey team survived a scare against Latvia in their first elimination match-up at the Olympics on Tuesday. After three periods the game went down the wire and overtime was needed to break the 2:2 tie. In the end, the Czechs advanced to the next round but the game could have easily gone either way.

All things considered, the Czechs had been expected to win this one easily and for a while it appeared the game would go according to script. In the first period, Tomáš Rolinek and Tomáš Fleischmann put the Czechs up by two and that was the way it stayed for much of the game. But in the third, Latvia came back: Mikelis Redlihs and Martins Cipulis eliminated the lead in the closing minutes. 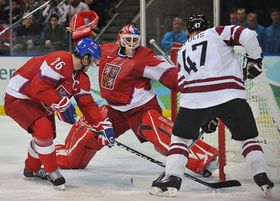 Photo: CTK After that, it was all drama with Latvia coming close to securing one of the biggest upsets at the Winter Olympics - close but not enough.

Take, for example, a shot by Latvia seconds into overtime that took an unexpected bounce, hitting Vokoun’s pads and just narrowly missing his goal. It could all have been over. The Czechs, who had looked sluggish, were then luckily able to pick up the pace, eventually setting up the winning play. David Krejčí scored at 5:10 of overtime, firing a 30-foot wrist shot through the pads of Latvian goalie Edgars Masalskis and that was it. Until then, the goalie had heroically pulled all the stops to keep his team in contention, blocking 47 shots, while the Czechs’ Tomáš Vokoun stopped 24. David Krejčí scores, photo: CTK Afterwards David Krejčí, who scored the game-winner, had this to say:

In less than 24 hours, the Czechs will hit the ice again, this time against Finland in the quarterfinal match – again at the smaller UBC Thunderbird Arena instead of the preferred Canada Hockey Place. Even ahead of Tuesday’s match, Czech coach Vladimír Růžička had complained about the quality of the venue, something confirmed by defenseman Tomáš Kabrle when he summed up the game:

“It was difficult, the ice was very soft. The second half of the period the puck was always bouncy as a result and sometimes this worked in Latvia’s favour. There were big chances. Their goalie was great, twice we had the puck on the line, but no additional goals went in. They came back near the end… but at least we won.” 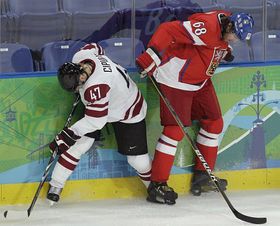 Jaromír Jágr (right), photo: CTK The Czechs will no doubt be hoping for more spark against Finland; pundits have pointed out that the Finns are the most preferable of possible opponents (compared to Russia, Sweden, or Canada), but the Czechs will still nevertheless have to play their best. One bit of good news is that at least they can count on Jaromír Jágr coming back: he departed in the second period of Tuesday’s game after suffering pain to his upper body related to an enormous hit he took from Alexander Ovechkin in the Czechs’ game against Russia. According to reports, Jágr at 38 still one of the Czech Republic’s best and most important players - should be ready to play. 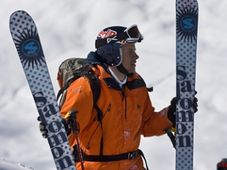 Freestyle skier Tomáš Kraus is one of the Czech Republic’s best athletes, specialising in the discipline of ski cross, which was featured for… 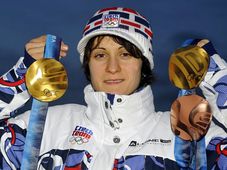 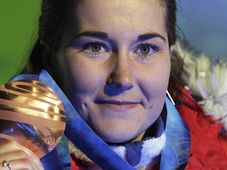 In Sports News this Monday: the 2010 Winter Olympics are the most successful ever for the Czech Republic with two gold and four bronze medals;…