Oldest traditional folklore festival comes to an end in Kyjov

The town of Kyjov, Moravia, celebrates the traditions of the surrounding region of Moravian Slovakia every four years with a folk festival. Thousands of people flocked to the town from August 14 - 17 to watch traditional folk bands perform, dress in colourful embroidered costumes, and enjoy what is called the King's Ride. Dita Asiedu tells us more about the festival: And what was on the programme? Folklore festival in Kyjov, photo: CTK "There was something to see from the early morning hours until late at night, so it's hard to give you a brief overview of what visitors could enjoy. The festival offered exhibitions, band and choir concerts, programmes dedicated to the history of folk songs and traditions, a fashion show, various games for children and adults. But it culminated over the weekend with a parade presenting various folklore groups. This year, some 1200 people of all ages - ranging from toddlers to grannies put on their traditional costumes and proudly marched through Kyjov for four hours. That is when the festival turned into one big town party with people dancing and singing to dulcimer band music in Kyjov's parks and gardens. The festival peaked with what they call the King's Ride on Sunday - an old folklore celebration remembering Hungarian King Mathias Korvin's escape after losing a battle with Czech king George of Podebrady. In order to be able to leave unnoticed, young Korvin disguised himself as a local girl in a traditional costume."

So the residents of the Moravian Slovakia region pull out and dust off their traditional costumes only once every four years? 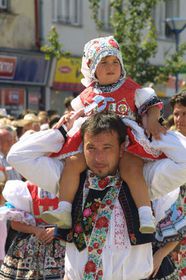 Folklore festival in Kyjov, photo: CTK "That used to be the case a few years ago but they say that there is a sort of re-birth of the trend of wearing traditional costumes on special occasions such as weddings, christenings, and so on. The traditional market on Saturday also showed that folk costumes were becoming trendy as lots of people queued up to buy them. But really, every family has their traditional costumes. They either get new ones or simply have new designs embroidered on their old costumes. In fact, a great majority of those who attended Sunday mass came in their costumes."

What about the town itself? Where is it located exactly, how many residents does it have?

"Kyjov has a population of about 13,000. It lies in southern Moravia and is surrounded by the Chriby Hills and the Zdanice forest. Today's Kyjov is a centre for the glass-making craft that is still very important in the country. However, it is surrounded by numerous little villages that mainly focus on growing fruit and vegetables. The region also boasts a thriving viniculture that produces unique-tasting high quality white wine."