On Tuesday organisers in Prague launched the official tender for the design of the Czech entry at Expo 2010 in Shanghai, a site to be visited by an estimated 30,000 people every day for six months from May – December 2010. From now until the autumn, Czech firms - in tandem with top designers, artists and architects - will be able to put forward proposals for the Czech site. There is one limitation: unlike Expos in the 1960s and earlier, they will not be designing an entire pavilion but will operate within a given space in an industrial hall.

On Tuesday Jan Velinger spoke with one of the organisers, Petr Prokop, and asked him to explain:

“First of all we won’t be building our own pavilion, we are renting the space from the Chinese. But the space is large, 2,000 square metres,and the Expo site is a good one, close to the subway and also to the Skywalk – an elevated pedestrian walkway – connecting all parts of the Expo. We will also be very close to a square known as the European Plaza of Attractions, which we hope will be visited by many, many people.”

RP: Anybody taking part in this competition will have to do what, concretely?

“They will have to find a solution and an idea for the space: the Czech Republic is spending half a billion crowns on this, 180 million of which will go towards the pavilion itself. It’s an opportunity to create something big. For this competition alone they will have to prepare many plans, 3-D models, drawings, explanations and much more about how it might look. Then we will choose the best.”

RP: In my mind’s eye I picture a regular hall which the Czech Republic will get: does that mean that the design will alter the shape?

“They might but it’s not necessary. The changes on the outside should only be on the surface. On the inside it could remain an industrial hall but it could also be completely different: the shape of the space could be completely transformed. The hall is nine metres high so there can be different levels.”

RP: There is an overall theme: what is it and how will the Czechs have to operate within it?

“The main theme of the Expo is Better City, Better Life. There are also sub-themes about connecting the cities and villages, and technological advances and so on. The Czech angle is called ‘The Fruits of Civilisation’. [That’s the very broad framework those taking part in the competition will have to consider.] Civilisation in the cities is preserved and protected. We want to focus the Czech entry towards the future, but of course from a Czech perspective entrants in the competition will also have to take into account the Czech Republic’s history. A strong historical background is there and should be taken into account - with a view to the future. So we can try and imagine what’s going to be here in 50 years.” This week in Mailbox: The 21st anniversary of the 1989 Velvet Revolution, a “Czech” week in Denmark, the Czech hard candy Hašlerky.… 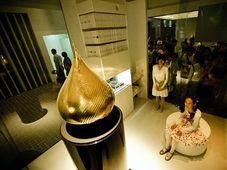 Czechs make their mark at 2010 World Expo in Shanghai

The 2010 World Expo in Shanghai closed its doors on Sunday, having attracted more than 70 million visitors from the world over. The… 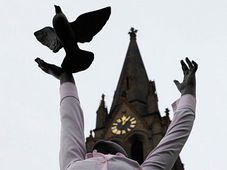 As temperatures drop even Prague’s statues are bundling up, former US secretary of state Madeleine Albright was in Prague this week…