Czechs on Monday marked 19 years since the fall of communism and the return of freedom and democracy to their country. It was a day of remembrance but more than ever before it was overshadowed by present-day concerns such as the Communists’ return to power in regional government and the siting of a US radar on Czech territory. 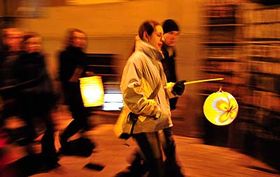 Photo: CTK As every year on November 17th the country’s political leaders, cultural figures and members of the public on Monday visited memorials to the victims of communism on Prague’s Wenceslas Square, Národní třída and other sites in the Czech Republic to lay flowers and light candles in memory of those who fought against oppression. But this year the atmosphere was heavy with controversy and the prime minister’s words held a note of warning. 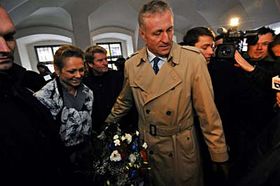 Mirek Topolánek, photo: CTK “These commemorative ceremonies – be they linked to the fight against Communism or Nazism – are important so that people realize that freedom is a fragile commodity which you need to fight for and to defend and which may require some sacrifices.”

Národní třída – the site of an infamous communist police crack-down on a student demonstration which sparked a wave of public solidarity and put into motion the events leading up to the fall of the communist regime - is usually a pilgrimage site for people bearing flowers and candles, but this year it far more resembled a battleground of activists supporting or opposing the siting of a US radar on Czech soil. The police were called to the scene to deal with a number of skirmishes and the prime minister - a strong advocate of the radar – was quickly drawn into the debate. 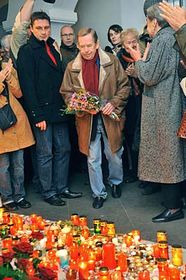 Václav Havel, photo: CTK “I am for the radar. We are here today to celebrate our freedom and we should remember that our present allies helped us to regain that freedom,” the prime minister reminded those present. One-time dissident and the country’s first post communist president Mr. Václav Havel also made an appearance at Národní třída and inevitably he too addressed the issue – expressing concern that security matters were being debated in the street.

“This is a technical matter that should be up to Parliament to decide. I understand young people’s need to rebel against something and in this case they’ve opted to rebel against the radar. But I think it is all a bit pointless.”

The angry debates between supporters and opponents of the radar raged all day long. As Václav Havel said the final decision on this national security issue will rest with Parliament, but the arguments flying around on Monday clearly indicated one thing – that almost twenty years after the fall of communism the security concerns of the Czech public still revolve around Russia and the possible return of the communists to power.