No light at the end of the tunnel for Czech Railways?

The general director of Czech Railways resigned on Tuesday after only 27 months in office. Petr Kousal was the 8th director of the company in the 12 years of its existence. Although the financial losses of the Czech Republic's biggest employer have decreased significantly in recent years, the company continues to face many challenges from both within and without. 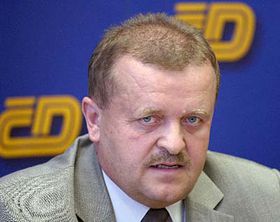 Petr Kousal, photo: CTK It's business as usual at Prague's busy main railway station, but Czech Railways are once again in crisis. The general director Petr Kousal announced his resignation just one day after the Labour Minister Zdenek Skromach threatened to make personnel changes in the company if massive redundancies were to continue. For the same reason railway unions are threatening to go on strike and at the same time the Transport Minister Milan Simonovsky is calling for Petr Kousal's successor to be more proactive and decisive.

The former director denies that pressure from politicians and the unions was behind his move. Having been appointed as an interim crisis manager, Petr Kousal says he has finished his task and certainly did not lack in decisiveness.

"While I was in office, more than 12,000 people left Czech Railways, which is unprecedented. But we seem to have lost political support in the restructuring process."

Since changing their status from direct state ownership to a joint-stock company three years ago, Czech Railways have managed gradually to reduce their annual losses from 5 billion crowns (215 million dollars) to some 670 million (29 million dollars) last year. Despite its long history in this country, railway transport is not a profitable business. Vit Sedmidubsky from the Transport Research Centre.

"The Czech Republic's railway network in one of the densest in Europe but with the exception of a few corridors it is technically out of date. The density itself is not much of an advantage. Both passenger and freight railway transport is cost-effective if you work with great volumes, which is not the case with local trains, which are loss-making."

A number of Czech regions still owe the carrier some 300 million crowns (13 million dollars) for running those loss-making lines. Although passenger transport has increased by some 4 percent since last year, freight transport on the railways has dropped by 5.5 percent since the Czech Republic joined the European Union. Railway transport expert Vit Sedmidubsky again.

"Freight transport on the railways has been decreasing since 1990 but it still covers some 30 percent of the transport market whereas the average in the old EU countries is less than 10 percent."

The former director of Czech Railways, Petr Kousal, says that much freight transport has moved onto the roads partly because of unequal terms for the two types of transport.

"We have to pay the state much more for using the tracks than lorries pay for using motorways. The longer route a lorry travels in the Czech Republic, the less it pays per tonne. It is just the opposite for the railways."

According to railway expert Vit Sedmidubsky the trend towards road transport is also caused by changes in the economy towards small and medium-sized companies which have different requirements than big industries. And secondly there are internal problems within the railway system - not only on a national but also a European level. Railway transport is slower, less flexible and railways in Europe are poorly integrated and don't behave in a competitive way.

Those are some of the challenges addressed by the so-called European railway packages - EU legislation meant to revitalise railway transport in Europe. 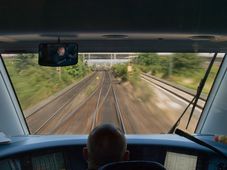 All aboard! Rail operators struggling to fill train driver positions

Czech rail operators are struggling to find new train drivers. Many are nearing retirement age and not enough young people are entering…