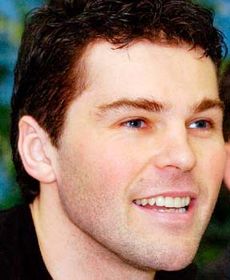 So why were there so many people for a regular game? And why has attendance of Extraliga games increased by an average of 1,500 this season?

The papers are in no doubt - they call it: "Jagr-mania."

Jaromir Jagr, one of the NHL's star forwards, has returned to the Czech Republic to play for his home team of Kladno because of the NHL dispute which has brought play in North America to a standstill.

"Well it's great euphoria for the fans here. The attendance is growing very fast. People are crazy about Jagr - that's the first star here. They see he is an all-star player, that he is maybe the best offensive player in the world. He is leading his team, he is playing with his heart here. We can see that he likes to play for his home town and that he really cares about the team." 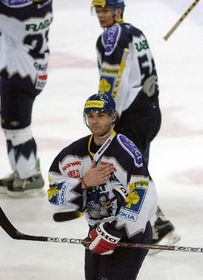 Jagr greets the fans in Prague's Sazka Arena, photo: CTK Fortunately for Czech hockey fans, Jagr is not the only NHL player who decided to come home. 52 others have also returned to the Czech Republic to play while the NHL dispute continues.

The chance to see these homegrown hockey stars play on local ice has changed the face of hockey in this country.

But what is it like for players to return here and play in the Czech Republic's Extraliga after years in the NHL? Slavia's Josef Vasicek normally plays for the Carolina Hurricanes:

"It wasn't so bad, I mean a lot of guys have been playing here so ah, the style of the game it's ah, almost the same, you know, it's pretty fast, pretty quick, and a lot of guys know what to do with the puck so, ah, it's not bad."

Jaromir Jagr enjoys star status in the Czech Republic, but is he worried that his presence here, along with other NHL stars, could be at the expense of young local league players:

"You know, I understand that when we come here a lot of players are losing their jobs, but on the other side, I think the league got a lot better and the defense appreciate it and the reaction is that their coming to the hockey games, you know most of the games are sold out - so that's that's business, that's the way you have to look at it."

So, while the NHL lockout causes an extended nightmare for hockey fans in North America, Czech fans are praying that this idyllic dream-state will last as long as possible.